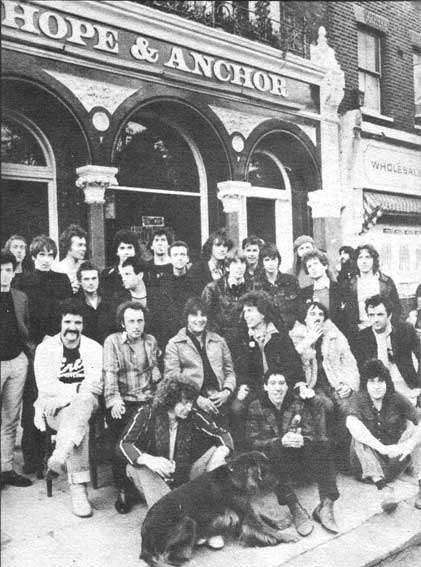 22nd November 1977: 35 years ago, to the day, The Stranglers made their final live appearance in the cramped cellar of a north London pub whose name has gone down in their history-the Hope & Anchor.

The ‘Hope’ occupies a corner plot on Upper Street in Islington and, for many years, it has played a pivotal role in the development of a large number of  well known groups, such as XTC, X Ray Spex, Madness, Dire Straits and a certain Guildford based band (not forgetting Shakin’ Stevens!). It was a major venue on the London pub circuit, along with the Nashville and the Red Cow, and played an important part in the ‘pub rock’ boom of the mid 70s.

The landlord of the Hope was the affable Fred Grainger who was also responsible for booking the bands to play there (unlike many of the other London pub venues which were controlled by Dai Davies’ & Derek Savage’s Albion Agency).

In The Stranglers’ early days, just as they were breaking onto the London pub circuit, the Hope was a target for them to aspire to. JJ recounted ‘I remember we were driving past the Hope one night in the ice cream van after we had played the Lord Nelson. Kilburn & The High Roads, who were hot at the time, were playing there that night and we said ‘One day we’ll play the Hope & Anchor!’ It was our ambition at the time’.

The Stranglers finally graced the Hope’s tiny stage in the latter months of 1975 and went on to play there a couple of dozen times in total. Bands would play on a low stage in the cellar and, according to JJ, ‘there was a chute, originally meant for the beer barrels, and all of our equipment, even the Hammond organ, had to go up and down there from the street above’.

By early ’76, although their first appearances there had been sparsely attended,  Fred Grainger had taken a real liking to the band and looked to them to open the Hope’s new residency. JJ: ‘Fred decided to take a punt on us and gave us the Sunday night slot as a residency. It was very exciting for us. We’d never had a favours done for us before that time & Fred was a bit of a conduit for us’.

On the first night of their residency, a lone person ventured down the stairs to the cellar. The band sat him down, bought him a beer (‘which we could ill afford!’) and played him their full set. The following week he returned with a group of his friends, a week later the place was packed. Word was getting around…

In this period, the Hope became a bit of a second home for JJ and he would often stay there: ‘I got on well with Fred and I was the one who used to stay overnight at the Hope & Anchor. We used to stay above the pub, there were several floors & lots of bedrooms. There would be lots of the older bands there, like Man & Dave Edmunds, as they were all friends with Fred. There were lots of drugs around and I was always at the end of the queue when there was a joint going around! There were girls around too, it was all very friendly upstairs. I was quite enamoured with the whole thing’.

NB: The band’s affection for Fred got him namechecked as the ‘Grainger man’ in Bitching alongside the ‘Phelan man’-Bill Phelan, the landlord of the Duke of Lancaster.

During the early months of 1976, the band continued to play the Hope (or the ‘Grope & Wanker’ as Hugh had rechristened it!) on a regular basis but, as they started to play further afield and their audience grew, their visits became less frequent. They were rapidly starting to outgrow its meagre capacity. JJ: ‘The first time it was packed out, I couldn’t believe it. That was after a few months, suddenly we were starting to fill out these places. I was amazed’.

Around this time, they used the venue when they were being filmed for the BBC’s Old Grey Whistle Test, which the (Get A) Grip (On Yourself) video was taken from. In this footage, there are various future faces of the London punk scene including Arturo Balinski (Bassick) of the Lurkers and Kermit from Sham 69, who were both early fans of the band.

By autumn 1977, whilst the band were riding high on the newly found success of Rattus/Heroes, the Hope was struggling financially. Ian Grant, part of the Albion team, hatched a plan to have a series of gigs there to raise funds. The idea was to invite a wealth of name bands, all of whom had played there during their formative years, to return to play the Hope. The bands were many and varied & the series of gigs was given the name the ‘Front Row Festival’. Ian recalls ‘I had much fun booking and producing it. Dai and Derek (and even Andrew Lauder-A&R at UA) said it would never happen’.

The Stranglers were approached and asked to play the 22nd of November, the opening night of the three week festival. As a favour to Fred, they were more than keen to help and gladly accepted. JJ: ‘That was the kind of thing we did at the time. It had been so hard for us during that time and we wanted to thank the few people who had helped us out. We felt it was the least we could do’.

The appearance had to be kept lowkey as the band’s huge No More Heroes tour was scheduled for that autumn. The culmination of the tour was a staggering five night run at the legendary Roundhouse at the start of November, which would see them break the attendance records of The Stones & The Who. Two weeks later, their next gig in the capital would be back in the familiar surroundings of the cramped cellar which struggled to accomodate 100 people! It promised to be a memorable night and, as it happened, a fitting farewell to the venue that had helped establish them…

During the day of the gig, another film crew descended the stairs to the cellar to capture the band during their soundcheck. Finchley Boy Al Hillier remembers that day: ‘The whole place was buzzing with activity and the arrival of a film crew at some point in the early afternoon only added to the excitement and anticipation. I remember that there were two cameras set up and have recently been told that it was a Granada production. The boys went through their set and it was great watching the sparse audience lapping up the atmosphere and watching the creation of film archive that captures the moment perfectly’.

On the night, the band, their crew, their touring gear, the Finchley Boys and other fans crammed into the cellar. The band played a blistering set in front of a hot & sweaty audience. Al: ‘To say that the Hope was packed was an understatement and the temperature up top in the bar area was unbelievable so you can imagine what it was like downstairs. The Stranglers’ faithful, now numbering many more than the one man and his dog from earlier days, pushed and jostled their way down the narrow staircase and the band delivered their set including a new song written for the occasion Tits. Another memorable night that saw The Stranglers back in one of the venues where it had all started and echoed for me memories of another pub venue ‘The Torrington’ where it had all started for the Finchley Boys a year earlier. It was truly incredible and, for a 19 year old, it was undoubtedly the perfect way to end a year that saw the beginning of a new era for the band’.

The setlist that night featured many less familiar tracks which were not part of their live set at the time:

Listen to the full set on Spotify here

The band’s set was recorded for posterity, as had all the other headlining acts, and a double live album ‘Hope & Anchor-Front Row Festival’ was released featuring tracks from each of the bands. Ian Grant takes up the story: ‘ Some people said we’d never get all the bands to agree to royalties. Clive Banks of Warner Brothers agreed with me that we could and he approached Dave Dee at Atlantic Records.  The album charted at number 28 if I remember rightly. The launch was fun too. Alan Edwards, who I engaged as Stranglers’ publicist, did the PR and he had the crazy idea of launching the album with as many of the artists’ Mums present. Alan and I organised that classic photo in front of the Hope to promote it too and it ended up on the cover of Melody Maker. Those were certainly great days’.

Thankfully, the full recording of The Stranglers’ set that night, which had been gathering dust in the EMI vaults for 15 years, was finally released on CD in 1992. Sadly though, due to the limitations of CD timing and the length of the setlist, some of the between song banter with the crowd had to be edited out. However, it is still a fitting document of the last time the band were to play the Hope & Anchor, a venue which had played such a vital role in their early years.

35 years after that final visit, JJ remembers the Hope fondly: ‘It was a very small venue, it was rammed, sticky and hot. It was a great education for us…’

Thanks to JJ, Al Hillier and Ian Grant. Thanks also to Adrian Andrews

If you want to visit the Hope & Anchor to see the legendary venue for yourself, Highbury & Islington is the closest tube station and it’s about five minutes walk down Upper Street towards Angel tube. Here’s a map: 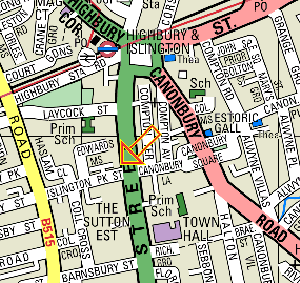