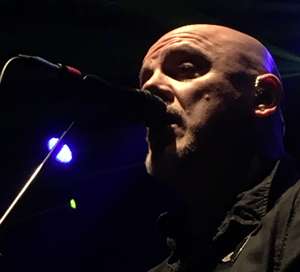 It’s been a little while since we interviewed Baz so we thought we’d get a quick Q&A session with him immediately before he left for the Antipodes to chat about all things Stranglers. Topics cover the busy gigging year for the band in 2017, plans for this year and writing new material. Firstly, back to last summer festival season… 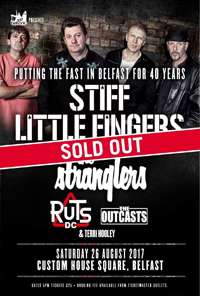 Last year’s festival season seems so long ago now. Looking back, were there any of the summer gigs that stood out?

Yeah there were quite a few… the Hyde Park gig was a good one , catching up with a lot of old faces, and playing to a decent size crowd at the opposite end of the park, away from the numbskulls…enjoyable show. We did Godiva in Coventry which was a huge crowd, and some great ones across Belgium and France too.

The SLF gig in Belfast was really well attended as you’d expect, and we really rose to that one. Played a weird beach gig in Cornwall too…We had a very enjoyable summer all in all…

And any that you didn’t particularly enjoy?

Can’t think of any offhand…ah yes… we had a bit of a bummer in Portugal due to sound difficulties. Travelled all day, stayed in a beautiful hotel, ate great food and looked forward to the show. Got on stage and it all turned to shit in the blink of an eye in front of 15,000 people. We had a couple of false starts and heads went down… and we worked very hard to pull it back. In the end it was all smiles, but for a while we had that sinking feeling. It actually did us some good…keeps your feet on the ground, gigs like that.

Late in the year you crossed the Channel for a French tour, clocking up nine dates around the country. It’s a country that you always go down well in, pulling large crowds. How was it this time?

Yeah it was great. Stayed in some beautiful hotels, and again, played some towns we hadn’t before, which is always nice at this stage in our lives…haha. The weather towards the end though, in northern France, was amongst the nastiest I’ve encountered in a while…there was a total deluge which lasted for 3 days nonstop…washed the whole of that part of the country out.  The gigs were very well attended and the venues were really great …they really know how to look after you in France, in every respect. The venue food is special, and the facilities for the crew, who have to hang around all day, are great. There are laundry rooms so you can wash your smalls and delicates, which as we all know, road crews have in abundance, and great showers and bathing rooms. The O2 circuit in the UK could learn a thing or two I can tell you… they’re great gigs, but you don’t want to hang around backstage for too long… some of them leave a lot to be desired…real shit holes, which is shocking when you consider how much money these venues make.

The French set featured the (electric) live debut of Don’t Bring Harry and recent sets have also included the likes of Bear Cage, Four Horsemen and similar other live rarities. It seems like you are exploring the archives to select seldom played tracks. Do you enjoy having such a varied back catalogue to choose the set from?

Oh yes. The process of choosing the set is always fun…there is an embarrassment of riches to choose from, new and old.

You have just been ensconced in the rehearsal rooms honing the set for the upcoming dates, without giving anything away, can audiences expect any surprises?

Will you be playing the same set for the all of the dates this spring? 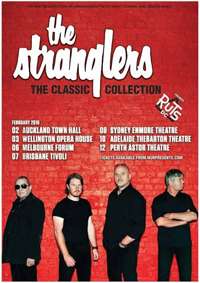 You shortly leave for the Antipodes for a run of dates. You’ve mentioned previously how much you enjoy travelling to Australia & New Zealand. Are there any particular places you like to visit ‘Down Under’?

Well one of my kid brothers lives in Wellington in New Zealand, so I’m flying down a few days ahead of the band to spend some time with him and his family, as I did 2 years ago when we were last there. It was nice to visit Adelaide on the last tour as I hadn’t been there before, and we’re going there again. We’ve got mates in Sydney and Melbourne, and some great pals in Perth who we stay with, so it’s all looking great. The shows have sold very very well, and we’re looking forward to it. It’s bloody hot there at the moment too, and although my chrome dome seems to survive the suns’ rays pretty well, I’m going to have to be careful in the temperatures they’re experiencing there at the minute. I did some interviews with Melbourne this morning and it was 39 degrees there today…

Joining you on those dates are Ruts DC, a band that you seem to have a real affinity with, do you think that this will make life on the road out there even more interesting?

Most definitely! They’re a great bunch who still know how to have a good time. I got up and played with them at a gig in Yorkshire last August… they’d been drinking on the train all the way up from London, and when I saw them I thought to myself “this isn’t looking too good…they’re rat arsed”… but as soon as they got onstage they were super tight and played like gods. I know that’s not typical of them though…they’re pros…when they toured with us last year they were a pleasure to be around. It’s going to be a lot of fun with them down there. 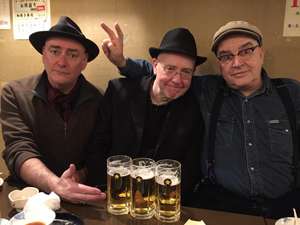 You mentioned that you joined Ruts DC onstage at a recent gig in Hebden Bridge. How did that come about and was it intimidating playing live with some of your heroes?

On the UK tour they mentioned they had some summer gigs, one of which was very close to where I live, and asked me if I wouldn’t mind going along for a bash…I jumped at the chance… the chance to just play very loud rock guitar with a great band was too much to resist…as it should be for everyone… No it wasn’t intimidating in the least… just really enjoyable. I’ve always admired the Ruts… they’re a formidable band, and with the release of their last album, they proved they’ve still got it… really powerful and expertly produced.

On your return from the Antipodes tour, you head over the Irish Sea for three gigs. It seems that you don’t get to play over there as often as you’d like to. What factors can prevent you playing more gigs in Ireland?

Not being invited!! It’s really as simple as that. We’ve never been scared of going there, as I know some other bands are…especially American bands, but we’ve never had any bother over there…why would we? It’s music…that’s all it is. We’ve come in for some stick in recent years from some Irish fans who accuse us of overlooking and neglecting them, but we go every time we get the chance, and those chances come from being invited to play by a promoter who thinks it’ll work. People think we just get on the phone and go “we’re coming”! but that’s bollocks…you have to be asked. We were asked by SLF to go and help them celebrate their 40th anniversary in August…there was a huge turnout, we blew the roof off the place (or would have had it not been outdoors), and we were invited back. It’s not rocket science…

As well as Dublin & Belfast, you also head west over to Limerick which is a first for the band. Do you consider it a challenge when you visit previously uncharted territory?

Always… it’s great to go somewhere new to play. Obviously they’ve heard of us there but it’s a ‘new’ gig for us… I’ve always wanted to go there.

Joining you for all of the Irish and UK dates are Northern Irish indie rockers Therapy? You go back a while with the band’s singer/guitarist Andy Cairns. How did you first meet?

No, I don’t really known Andy that well actually. We’ve always just said hello really, probably stretching back to the Smalltown Heroes days when we first shared a few bills. However, we ran into them a couple of summers ago in Holland, and him and I just really hit it off… probably due to the fact that we’re both pretty garrulous chaps… he’s a lovely fella, as are his bandmates, and I’m really looking forward to touring with them.

A common sight at your gigs nowadays are fans who have travelled from different countries, or even continents, to see you. For example, there are lots of British fans travelling out to the Aus/NZ dates again this year. Do the lengths that fans go to to see you astound you?

Well we’ve touched on this before haven’t we? And it’s always the same answer, it astounds us. That people are willing to put their entire lives on hold just to go and see a band play on the other side of the world, or even in their own country, for weeks at a time, is very humbling… I don’t care who you are, or who you think you are… if they don’t come to see you, you don’t have a job…simple as that. People who treat their fans like shit, and we all know who they are, don’t deserve the life they have.

Last year you & JJ got together on various occasions to work on new material and you have more sessions planned this year. How are the new songs shaping up?

Slowly but very surely. We live 1,000 miles apart, so we have to plan things more carefully these days…but technology has helped us to work all those miles from each other pretty well. I go to him, he comes to me, then we all get together, which we did just last week. There are some great ideas flying around.

Every band has different ways of writing. What works best for you guys?

Over the last near 2 decades we’ve perfected how we write. I have my ideas, he has his. We record them on our phones initially, all the time, then when we get together we sift out which ones were going to work on, usually across a kitchen table somewhere with a couple of acoustic guitars and some nice French red. Some come quickly, others don’t. As we get older we get more selective too, but we work on everything together up to a certain point. I have a studio at home that I use to enhance what we’ve done so far, and make demos that the others then get emailed. By the time we all get together there’s been enough homework done and new ideas formulated individually, and if we’re all in the right frame of mind, it can come together in a day. But as I say, it’s not always like that. It is what it is. We’ve done it this way since Norfolk Coast on and off.

Is it too soon to ask if there any plans to record?

Well, writing stuff generally means you intend to record it sometime yeah…when that’ll be is anyone’s guess…but it’ll be soon… Is that vague enough for you? Hahaha!

So, is there a possibility that we will get a sneak peak of new material on the forthcoming dates?

That would be telling…you’ll have to wait and see… Crap answer I know but it’s all you’re getting…!

Thanks to Baz for taking the time to answer our questions whilst he was packing for the trip Down Under!