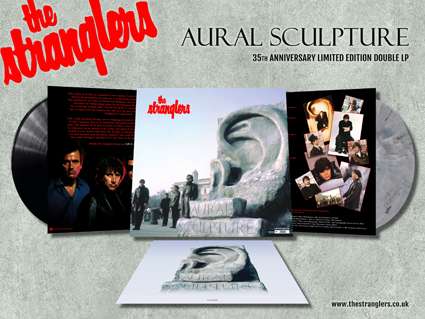 The next album to receive a deluxe vinyl reissue is Aural Sculpture, the second studio LP from the band’s Epic/Sony period originally released in 1984. The re-release is limited to 1000 numbered copies and sees the original 11 track LP coupled with a bonus 14 track album, entitled Shrouded In Black, which features associated b-sides plus 9 additional live tracks, most of which are previously unreleased. Both albums are pressed on heavyweight 180 gram vinyl, the original LP on black and the bonus on stone grey marbled vinyl. They are housed in a wide-spine sleeve featuring an enhanced image of the front cover plus newly designed inner sleeves with lyrics and photos. In addition, the double album includes a 10″ x 10″ art print featuring the Aural Sculpture ear image, all of which are hand-signed by the band. The Aural Sculpture reissue album expected into stock soon and available to order from Townsend Music for early December delivery here