We are pleased to confirm that the band head back out on the road for a tour of the UK and Ireland in March 2019. Under the title ‘Back On The Tracks’, the tour consists of a total of 19 gigs covering Northern Ireland, Republic of Ireland, Scotland and England. Kicking off across the Irish Sea, the first gig sees the band returning to Ulster Hall in Belfast on 28th February and then heading south for a Dublin Olympia show on the 1st March. After a few days for travel, the next gig is in Scunthorpe in Lincolnshire on the 5th which no one can be sure if the band have ever played until now! The itinerary then heads north of the border for a trio of Scottish gigs visiting Aberdeen, Dunfermline & Glasgow (back on the Saturday night!). The tour then visits a further 13 cities in England including a hometown Guildford show on the 19th and the London gig at Brixton O2 Academy on the 22nd. Brighton is back on the itinerary for 2019 and there is also a concert in Bournemouth before the customary tour finale at O2 Apollo in Manchester on the 30th. Special guests for all dates are Dr Feelgood 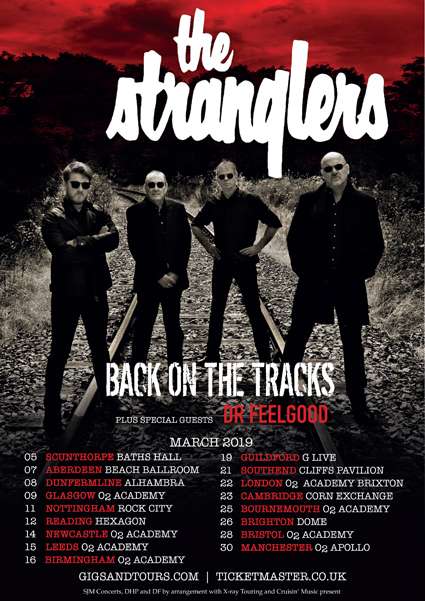