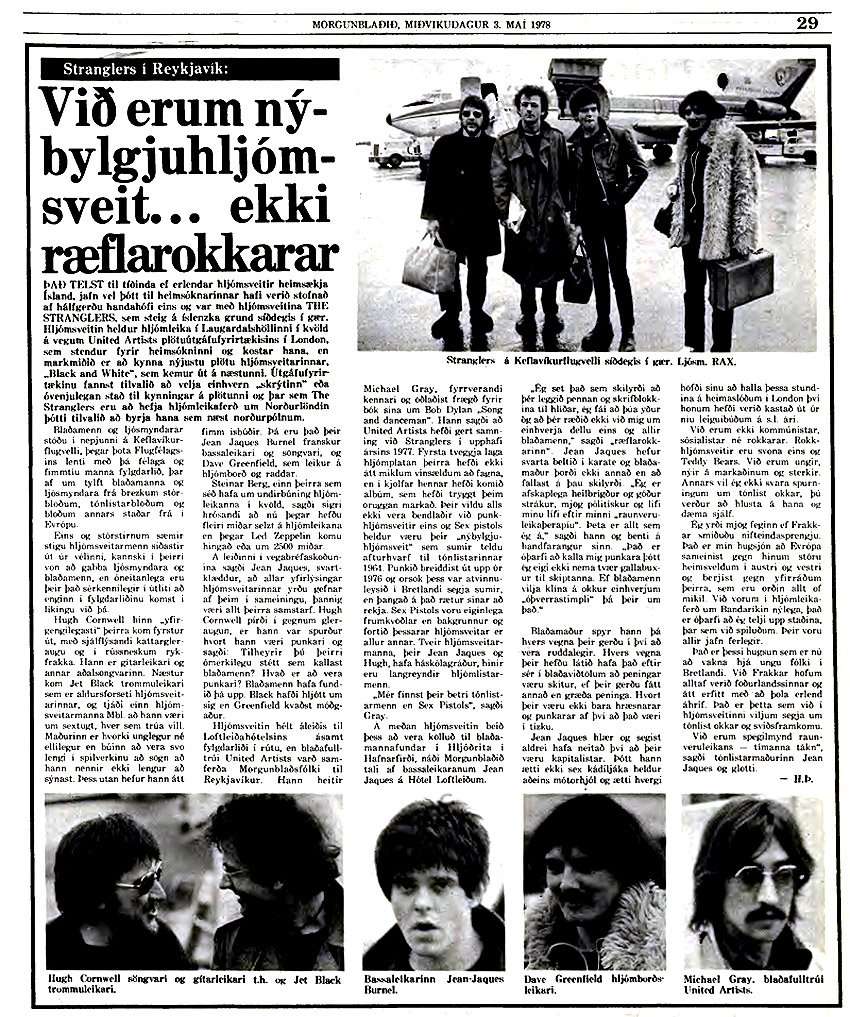 Following a hugely successful year and the release of Rattus & Heroes, the band decamped to Bear Shank Lodge near Oundle to begin writing their third album in the winter of ’77. With recording completed at TW Studios and mixing finished with Martin Rushent during their visit to the US in Spring ’78, the band were ready to release their new studio album Black and White in May ’78.

With the stark, polarised sound of the album, a plan was hatched for the album’s May press launch to be held in a similarly stark destination-Iceland. With the backing of UA records, whose confidence in the band was high after their amazing record sales during 1977, it was decided to fly assorted record company people, a few Finchley Boys, journalists and photographers out to the tiny, volcanic island in the North Atlantic for a two day press junket.

In addition to the promotional purpose of the expedition, the band would also play a gig in Reykjavik, the island’s capital. The country had been starved of live music and  the last major concert there was played by Slade three years earlier. The trip would be the perfect opportunity for the band to notch up another New Wave first.

So, at 2pm on Tuesday 2nd May 1978, the party of the 50 or so travellers gathered at Heathrow Airport to board the specially chartered IcelandAir flight number FI211 to Reykjavik. On arrival at Keflavik airport, the band posed for photos on the runway with the plane behind them and were then whisked away to their hotel.

The story of the Stranglers’ visit was huge news in Iceland and the band were photographed everywhere they went no matter what they were doing! There are even various shots of JJ eating!! The island’s newspapers were full of column inches about the trip. Later that day there was a rather bizarre press conference at Ice One Studios which the band (minus Dave) attended. It was a decidedly strange affair as none of the gathered Icelandic press actually asked the band any questions! The journalists present got steadily drunk on a ready supply of a specially made ‘Stranglers’ cocktail.

Wednesday May 3rd was to be spent on press duties up until the gig in the evening. The day’s events started with dip in the open air hot, volcanic springs which only a few brave souls attempted. The band remained in their beds! After numerous photo opportunities with the band posing on bleak lava flows, by gushing geysers, on snow with skis and with an Icelandic flag, the party then travelled to a remote skiing chalet to hear the album playback of Black and White.

After food and more drinks, they then returned to their hotel where Hugh, in the privacy of his own room, had decided to mark the release of the album by stripping off and getting painted half black half white using black make up and talc. Graphic, full-frontal photos were taken and the image even made the cover of Record Mirror, albeit in the censored version with Hugh’s hands covering his tackle.

Next stop was the gig at the city’s Sports Hall which was a total sell out of more than 4,000. The crowd was further bolstered by JJ who let many ticketless locals into the venue via the backstage entrance. Incredibly over 2% of Iceland’s tiny population witnessed the gig that night. By all accounts, the gig was a riotous affair… The young audience were apparently totally inebriated on spirits and the floor of the hall was covered in broken bottles and debris. Chaos ensued throughout the gig as the band were joined onstage by both the police and a sizable chunk of the audience.

The band completed their full set and, due to the deafening cheers of the audience, they returned for two further encores. The gig had been a huge success… Post gig, the band and press party headed for town and an infamous club called ‘Hollywood Discotheque’ where the evening’s drunken, debauched events carried on well into the small hours.

Thursday 4th May was the final day of the trip. Again, that morning, the hardy went swimming whilst the more sensible chose to sleep off the previous night’s alcohol. Bizarrely, for some odd reason, a horse riding session had also been arranged which Dave willingly took part in. Sadly, one journalist was injured after a fall…

During the day, the band even had a meeting with the mayor of Reykjavik who presented each of them with a thick, white woollen Icelandic jumper as a souvenir of their visit. The coach back to the airport wasn’t due to leave the hotel until mid afternoon so the rest of the day was taken up with yet more photos, more interviews and lots more drinking.

One brave, drunken journalist from a London paper, full of bravado, decided to brag to JJ about his drinking prowess and challenged him to a drinking contest!  Needless to say, by foul means, the journo was bound to lose the ‘contest’ and he ended up drunk and comatose on VAT 69 whilst JJ remained perfectly sober. The party boarded the bus to the airport, with the drunken journalist having to be carried aboard. On arrival at Keflavik, the journo was put into a wheelchair and was pushed to check-in by JJ, but only after the band had grouped around the wheelchair for one last photo opportunity!

Sadly, for the paralytic journalist, the IcelandAir staff refused to let him board the plane to Heathrow and he was forced miss the flight so he could sober up in the Terminal. The band and press party (minus one member!) departed at 5.30pm for the return to London.

Recalling the Iceland trip 35 years later, JJ (shown right, eating) laughed: ‘You could write a whole book about that one trip! We also used it as an opportunity for a spot of revenge on some of the journos who had given us a hard time previously. One journo’s saddle was somehow loose when he got to clamber on his pony with the result that he fell off. Another, whilst peering into a geyser, was accidentally pushed into it getting slightly wet. Another journalist was berated by Hugh in front of everyone else…and, of course, there was the wheelchair incident…’

The trip had been a fantastic triumph, the band had played a ground breaking gig and the publicity created by the press junket gave the release of Black and White a massive boost. Reviews of the album were generally very favourable and the band, buoyed by the positive vibes, headed off immediately for Scandinavia to start their European tour. Sadly, the tour was beset with issues, such as gig cancellations, the reappearance of the Raggare in Sweden and the legendary riot in Cascais, Portugal. It couldn’t all be plain sailing now, could it?!