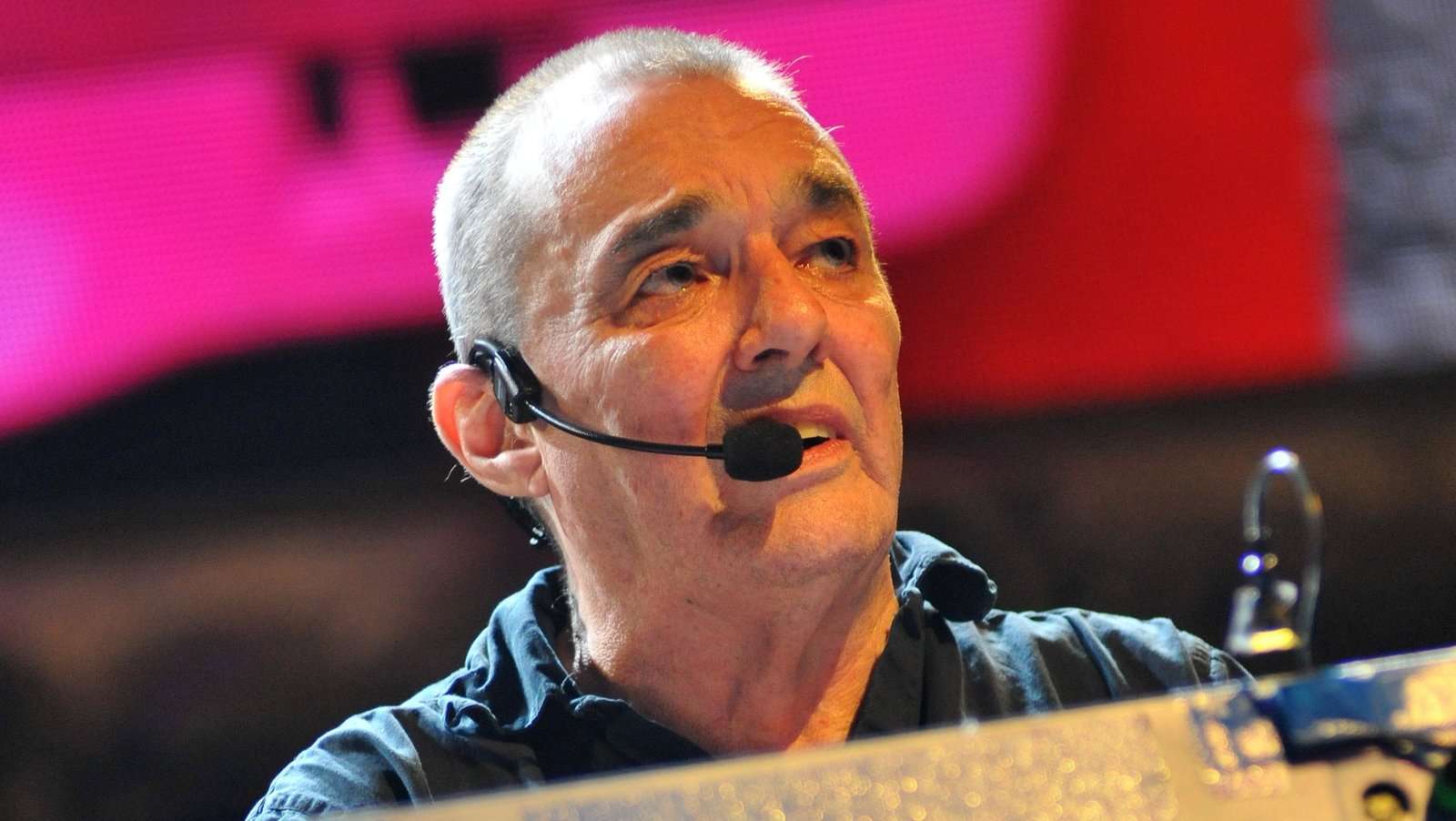 First of all this is not a gig report as such, more of a diary of what went on during the trip.

For me it started 9.15am Tues 30th Mar. Steve (a taxi driver friend) picked me up in a borrowed car (his taxi had broken down the previous day). We set off for Heathrow and a short distance later noticed a flashing red light on the dashboard. Steve rang the guy he’d borrowed it from who told us it was probably low on water and nothing much to worry about. When, however, we started to hit traffic the temperature began to rise. We struggled on for a while and finally found a garage. After about 10 mins Steve finally figured out how to open the bonnet and we filled the rad up. No more probs. Got to Heathrow on time and met up with the rest of the band and crew. Checked in, went through passport and security checks and headed for the bar.

The band (on the way out) were travelling upper class (probably so we’d be more awake for the gigs). This meant fully reclining seats so you can sleep. Went to my seat and was handed champagne. The in-flight entertainment had scores of films and TV programmes. Unfortunately it kept crashing and it took the crew an hour or so to get it fired up. More drinks, food, a couple of decent large cognacs and I managed to get a few hours sleep, then dozed for most of the rest of the journey.

We arrived at about 9.40am Wed., went through immigration and got the equipment. Travelling upper class means you’re first off the plane and your luggage gets off-loaded first, so we were fairly quick. Met Ichico (our guide and translator). I managed to remember her name during the tour by thinking ‘Park’. (As in Ichicoo park).

After coffee and a couple of hours wait we got the Narita Express to Shinagawa station and transferred (with the equipment) to the Bullet train to Nagoya. Picked up at station by a couple of vans and got to the hotel at 3.45 pm.

When we’d checked in we decided that it was better to stay awake as long as possible to reduce jet lag, so we arranged to meet in the hotel bar in 30 mins. After about an hour there was no sign of Gary (tour manager for those of you who don’t know). Baz rang his room – no reply. Then Louis goes and knocks on his door. On the second try he’s greeted with a load of crashing and ‘F***ing B****cks. (more swearing) be down in 5mins.’ About 15 mins later he turns up and we go across the road to a Korean restaurant. After this the crew, Gaz and Baz go looking for a karaoke bar while JJ and I have a few drinks in the hotel bar until 10.00 pm. Then bed. I managed to stay awake another hour then slept.

Thurs. Woke up 4.30am and dozed on and off until 11.00. Had a long soak in the (very small) bath. The toilets in the hotels vary. Some have heated seats, some adjustable jets and temperature etc. They all, however, wash your bum. (also acts as a bidet if you’re female at the turn of a knob). Louis found this hilarious, and at the gigs you could sometimes hear him chuckling in the toilets.

Another thing. Smoking in Japan. Outside of the airport there was an enclosed smoking area – well ventilated though. On open station platforms there are smoking areas. On the streets, however, you are not allowed to smoke – although it’s OK in your hotel room, bars and restaurants. Odd, eh? Late afternoon I got hungry so went down to the coffee shop for a beer and some food. Gary and the crew had a production meeting with the local guys then we all met up. After a few more beers the others went out to eat. I ended up in the upstairs bar with James (my keyboard tech) until 11.00 – 12.00, JJ, Gaz and Baz apparently got back to the hotel at 3.30.

Friday. Went to the gig. JJ and Baz suffering a bit. JJ’s voice was bad but he managed the set OK. (contingency plans to change the set in case). The set ended up about 5 mins short as we had to be careful and hadn’t timed it properly. If any band ran over their allotted time (including the changeover) they were fined 1000 dollars for each 5 mins. After this show, however, we changed the set and added an extra number. Went back to the hotel then out for a surprise meeting with some of SIS Japan members at a restaurant they were meeting at. A few beers there, then back to the hotel bar with Baz and Gaz.

Saturday. Checked out of the hotel at 10.00 and caught the Bullet train to Osaka. We went straight to the gig as we were informed the hotel check-in wasn’t until 2.00pm unless we wanted to pay extra. So hang around the show for 3 + hours until show time. JJ’s voice still not too bad. After the show we checked in the hotel and, after a bath, met the band and Gaz in the 36th floor bar (amazing view) for a very expensive drink before going out to eat (and drink).

Sun. Pretty much the same routine. Left the hotel at 9.00. Got the Bullet train back to Shinagawa and took 45 mins to get to the gig. Another long wait until show time. JJ’s  voice, however, was too bad so we had to change the set around a bit. After the show it took a further hour to get to the hotel – the same one we stayed in when we played in 2007. At last a large room and reasonable – sized bath (not that we’re here for that long). Baz and I decide we’re going out to find an English bar we visited on our last trip. The bar we find easily – but it’s shut! Luckily we walk on and find another one further up the road. More beers, some fried chicken and then James And Ian join us – followed shortly after by a couple of Japanese friends. We didn’t get too late a night as we had the leave the hotel at 8.00 am to get to the airport. Pam rings me near midnight to inform me Steve’s taxi is still not right and the car he borrowed on Tues has a smashed windscreen, so I’ll be picked up by another local taxi firm.

The return trip was not as comfortable as going out. Because we didn’t have to play when we got home, the band were in Premium Economy (more legroom than cattle class and the seats recline a bit further), but it’s still virtually impossible to sleep. Instead of cognac we were offered the choice between Three Barrels brandy and Baileys. After what seemed like days we finally arrive (all bar JJ who stayed on an extra day to play with a band he produced a long time ago – a good deal as they paid to upgrade him to upper class on the return flight). Got my luggage, found my taxi and got home to yet more jet lag. It’s now Sat 10th and I’m just about back to normal. All in all though, a good tour (too short) and good fun.