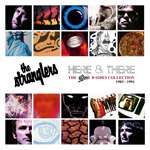 As part of the 40th anniversary celebrations, Coursegood are releasing a new 2CD compilation entitled ‘Here & There: The Epic B Sides Collection 1983-1991’. It will be available on tour and via Mamstore before its high street release later in the year. The 40 track collection compiles all of the band’s B sides and extra tracks from 12″ & CD singles which were released during the band’s time with Epic. Whilst CD1 focuses on the studio tracks from the period, CD2 gathers all the bonus live tracks as well as all six of the chronicles of Vladimir. The release will also be available on digital download too and has a running time of over two and a half hours!