During a brief respite in work on the next studio album last week, JJ and Baz took time out to record a track exclusively for the website.

The new song, entitled You are a swine, was also aired live in the JJ & Baz set at November’s Convention and shows the band’s often overlooked sense of humour. Enjoy!

Updated-the live version from the Weekendinblack is now .. available to download too (thanks to Louie Nicastro)

free download – JJ Burnel & baz warne “you are a swine” 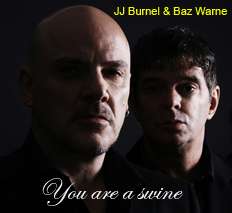 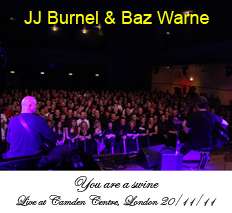 Whilst ensconced in Bath, JJ recently resurrected a waltz that had been floating around for a while. With its culinary-inspired lyrics and tongue-in-cheek delivery, he knew that the track wasn’t destined for the album.

Nevertheless, he & Baz recorded it on Friday 14th October (with Louie Nicastro at the controls) and they have kindly given this studio out-take to us for your amusement and listening pleasure…

The lyrics are as follows:

Yes, you may call me a swine

‘Cause I gave you a good time

And I had no secret plan to make you mine

Fulfilled a function for me but not a gourmet meal

You may be happy with a piece of toast

I’m not satisfied until I have my Sunday roast

With a bottle of wine, you may call me a swine

Don’t look for a sign, you may call me a swine!

Raining on a taxi rank

Yes you may call me a swine

I’ve been told much worse before

Reminds me of steak tartare

Yes you may call me a swine, you’re a swine

Yes you may call me a swine, you’re a swine

Swine received its live debut during the Baz & JJ acoustic set at the Weekendinblack Convention on Sunday 20th November 2011. The ‘live’ version from that day is available to download above and features the Convention Choir’s backing vocals as shown below!

Thanks to JJ, Baz, Louie Nicastro and the Camden Convention Choir!