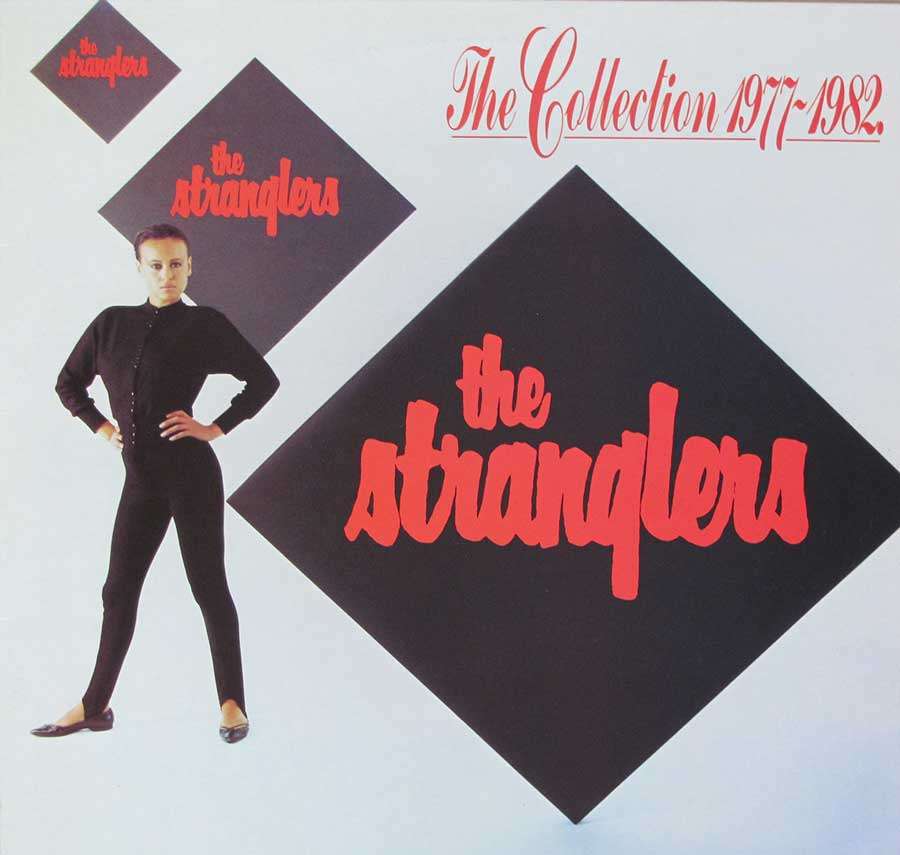 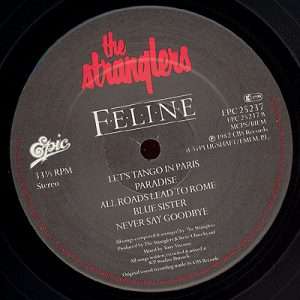 Summer 1982 – The Stranglers negotiated the end of their five-year EMI recording deal with a swansong single Strange Little Girl and a compilation album The Collection 1977-1982. The single peaked at number seven – not bad for a track EMI rejected in 1975 – and the compilation just missed the Top 10 meaning the band left the label on a chart high.

While EMI was preparing the band’s final contractual releases, the group became the focus of interest from various record companies eager to sign up such a proven and established act, as JJ recalls: ‘When we left EMI, everyone was after us. I remember going on Richard Branson’s boat in London as he wanted to sign us to Virgin. We eventually plumped for CBS and they put a lot of money behind the release of Feline.’

Before The Collection had even been released, the band were keen to start work on the follow up to their last studio album La Folie for their new label. They had already been working on new material for a few months in the West Country. JJ remembers a visit from a Hollywood star while they were there: ‘The whole album was rehearsed at Jet’s place. We had met Robin Williams when we played in America and I had visited his ranch in the Napa Valley when we played in San Francisco. We got pretty friendly and, when we were beginning to rehearse the tracks for Feline, he came over to stay at Jet’s house with his first wife. He was de-toxing at the time but, unfortunately, when he stayed with us he relapsed…’

With new material prepared, they were ready to find a studio and start the recording process although, for a variety of reasons,  they weren’t happy to return to any of the studios they had recently used. JJ suggested that they try ICP in Brussels, Belgium, where he had worked producing Polyphonic Size. The band agreed and ICP was booked for a four-week slot that September.

Following his work on The Raven, The Meninblack, La Folie and Strange Little Girl, they retained Steve Churchyard as engineer for the sessions and also to help them with the album’s production. In addition, Tony Visconti was drafted in for the final week to mix the tracks. JJ: ‘I remember picking Tony up from the airport and he was waxing lyrical about what we had done for his career. After his Bowie period his career had gone downhill and had been in the doldrums for a bit, and working on Golden Brown had revived it. We’d helped get his name back up in lights.’

Throughout that September, the band decamped to the Belgian capital to record the album. During part of the sessions all of the band members’ girlfriends (except Hugh’s who lived in New York) spent time in the studio too, and there were suggestions by Hugh in later years that this might have affected work on the album. JJ responds: ‘Well, it affected Hugh as he didn’t have a girlfriend to call upon at the time.’ Asked whether having Anna (von Stern) there helped him to relax, he laughed: ‘No, being with Anna was anything but relaxing! I was relaxed because I was taking certain substances which knock you out, but that’s another story!’

Around that time, Hugh and JJ had taken delivery of a bespoke acoustic guitar and bass (left) made by the Kinkade brothers, a small family business based in Bristol. Having first experimented with acoustic guitars on Strange Little Girl, they decided that the sound would suit the latest batch of songs perfectly. JJ: ‘I can’t recall how we originally found Kinkade. We’ve always had so many West Country connections with Sil, Bruce, Hugh and Jet so I assume one of them had heard about them’. (Note: JJ’s original prototype Kinkade bass was later auctioned at the Weekendinblack in Nov ’11).

In addition, to counterbalance the delicate acoustic guitar sound, Jet chose to use

the synthetic effects of the Simmons electronic drum kit, which had recently appeared and were de rigeur at that time. ‘We weren’t luddites and there was all this new technology around and Jet was up for it,’ JJ  remembers, ‘We had already been criticised by our peers for using synthesisers. Everything was happening with digital in the eighties and we wanted to embrace it. If something suited us, fine. If it didn’t, we dispensed with it. We thought that was what we should be doing – experimenting.’

The songs showed an interesting  juxtaposition of old and new sounds which became the album’s trademark. In addition to the band’s altered guitar and drum sounds, Dave’s keyboard sound had evolved too. Gone were his more familiar runs and arpeggios, which characterised earlier albums, to be replaced with huge, powerful washes.

Vocally the majority of the album was sung by Hugh with JJ singing only two tracks of the nine in total. It seemed a greatly reduced proportion compared with previous albums. JJ elaborates on the reason: ‘By this point, we were more or less singing lyrics that we had written. If Hugh wrote lyrics to a song, he’d sing it and, if I wrote them, I’d sing it. That’s how it went for Feline’.

With the recording and mixing process completed within the four-week period, CBS set a release date of late January 1983 and started promoting the band’s new studio album. After various rejected suggestions, the band settled on the title Feline for the album. JJ: ‘I came up with the title as it suggests restrained but powerful and dangerous. Like the black jaguar on the cover, it was something which is seductive and just about controlled but can potentially change at any moment. We felt the title lent itself to that.’

In advance of the album, a perfect portent of Feline’s new direction, European Female was released as a single early in the New Year. The release was promoted by the now obligatory music video filmed at great expense. JJ: ‘The new record company was really behind the release and spent a lot of our money on the videos for European Female and Midnight Summer Dream which were both expensive.’ Despite its radical new sound and breathy vocals, the single made the Top 10 in the UK, paving the way for Feline.

The album release was greeted with mixed reviews, from fans and critics alike. Some fans loved the new style, others couldn’t comprehend that this was the same band who created Rattus Norvegicus less than six years before. It seemed that public opinion was divided and the letters pages of Strangled magazine were filled with both positive and negative comments about the release. JJ recalls the band weren’t too concerned about Feline‘s reception: ‘We didn’t think in those terms. We had a golden opportunity to explore different things and fuck the consequences. If it fell flat on its face, that was what we’d expected from day one anyway, so we had nothing to lose.’

He adds: ‘When we released the album, a lot of people thought “What the fuck? It’s not punky or aggressive, it’s got acoustic guitars and what’s all that electronic drums stuff?” Many Stranglers fans were really non-plussed as it was so different to anything previously. That’s the nature of it, after the first or second album, they expect something from the “brand”. When you completely wrong foot people and try something new, it either shuts doors or opens new ones. That’s the exciting thing about going off at your own tangent. It is a huge commercial risk and gets you out of your comfort zone again, which, for The Stranglers, was always one of our strengths. Do what you feel. There’s nothing more exciting than going on your own path into uncharted territory.’

The album performed true to the band’s previous impressive form and reached number four in the UK charts. Interestingly, it also heralded a massive increase in interest across the Channel where the band had still retained their cult status. JJ: ‘The album was huge in France, it really hit a nerve there more than any other country. For some reason, it appealed to them with the softness, more melodic songs and acoustic guitars. It became a gold album there. We started to play to thousands there and it really picked up.’

The album’s success in France also unexpectedly introduced the band to the world of fashion as JJ recalls, ‘We met the Paris-based Japanese fashion designer Kenzo after he had used the whole of Feline for one of his collections. We heard about this and contacted him and he invited us to one of his autumn collections. We were backstage meeting lots of models and went back to a party at his house where Grace Jones came out of a cake! That was the first time I met her.’

Revisiting the album 30 years later, it still feels like a bold experiment for the band when many of their peers were sticking to the same formula. ‘I think it was a cool album – moody and atmospheric,’ says JJ, ‘It was the kind of thing you’d put on late at night to fuck to. It was also really adventurous and outside our type casting. It was a genuine attempt to create a European album and to marry the two sides of Europe, north and south, industrial and agricultural, acoustic and electronic. Commercially it was a bit of a grower but it shows yet another dimension to The Stranglers career overall which is multi-faceted. We were continuously striving to do something different and Feline was a conscious move in that respect. Music has importance and significance and should always challenge you.’