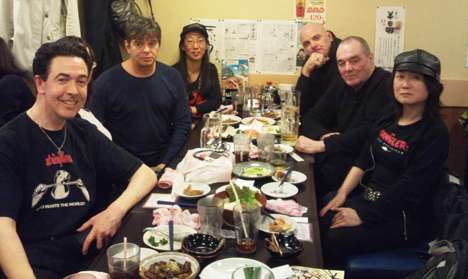 To complement Dave’s tour blog from the three April dates in Japan, here is a fan’s perspective of the gigs:

Monday, March 29th,2010, and I’m onboard a Virgin flight bound for Narita airport,Tokyo. Five years on from my last visit to the Land of The Rising Sun, I was returning to see the band that had originally inspired my interest in the Orient. So,despite an horrendous Sterling/Yen exchange rate, I felt a need to see the band in a country that has interested me since my teens and I felt it a fitting place to complete my bi-centennial of gigs.

So, on Friday, April 2nd, several days of acclimatisation later, and with the very useful JR Rail Pass in hand, I’m onboard the ‘Hikari’ Shinkansen bound for Nagoya’s Zepp Arena. This was handily located near the rail station, so, with the help of some friendly locals, wasn’t hard to find.

It was a smallish, modern venue, holding a couple of thousand I’d guess, with both standing below, and seating above at the back. The audience was very much Japanese, and a young, student-type crowd.

However, it transpired that I wasn’t alone, as a tap on my shoulder revealed Yuka from SIS Japan, along with another familiar face from Blighty, ‘Scottish John’; Rieko of SIS Japan, was also there, along with several members of  that group [as JJ says, `we’re all one big family’…]. 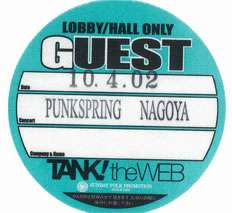 The band [JJ, Dave, Baz, and Ian] arrived on stage at their allotted time of 4 pm [many bands were appearing in quick succession, so it was a case of one on/one off and quick turn arounds], and without any introductions, launched into ‘Five Minutes’, followed by ‘Grip’, ‘Norfolk Coast’, ‘Something Better Change’, ‘Lost Control’, ‘All Day And All Of The Night’, and ending with ‘No More Heroes’. A short thirty minute set that seemed to go down well with the youthful home crowd.

Post-gig, and I was invited to attend a meal by the SIS Japan members; a local delicacy of chicken wings I was told, though I’m pretty much a vegetarian, a surprisingly difficult issue in Japan.

We were merrily enjoying ourselves at the said meal when in walked the band [minus Ian] along with tour manager Gary; Yuka had apparently organised this surprise appearance for the SIS Japan members as a ‘thank you’ from the band for their long term support and maintenance of the SIS Japan website [I just happened to be in the right place at the right time, so ‘arrigato gozaimasu’ Yuka!].

This was a sterling effort by the band I felt as they must have still been jet-lagged, like myself, but they had also been out on the lash the night before, so I heard.

Thus, several hours of merriment later, and a great start to this whistle-stop tour was concluded.

Next day, Saturday, and the Shinkansen is whizzing me down [Japan’s railways are superb and set the bench mark for others to follow; once experienced, nothing the UK can offer will ever do…first class is standard here!] for the hour’s journey to the Zepp at Osaka. This time, the venue was about a thirty minute subway ride from the JR station, near the bay area; the band were on even earlier today, at 3.30, but, again with the help of friendly locals and my very rusty Japanese, I arrived on time.

This venue was very similar to the last one, and located near the 55 floor World Trade Centre, whose views I didn’t get to see on this occasion. Again, the band started the set with ‘Five Minutes’ and ‘Grip’, but then switched to ‘Nuclear Device’ [thus preserving JJ’s sore throat], ‘Something Better Change’, ‘Peaches’, All Day and All of The Night’, ‘Spectre of Love’ and concluding with ‘Heroes’. Another warm round of applause was provided by the youthful Japanese audience.

The early finish enabled me to sample another local delicacy with the SIS Japan members, plus Frank from Wimbledon. This time, it was Okonomi yaki [a kind of thick pancake containing various fillings and cooked at your table]. ‘Oishi des.’

Sunday’s schedule meant a three hour Shinkansen ride back to Tokyo, followed by a thirty minute ‘Rapid’ service on to Chiba-Ken, where I lived in 1999. The ‘Mukahari Messe’ is a much larger venue than the previous two, holding around 20,000, I believe. There were three stages to enable an almost continuous stream of music to be played; the band were due on the Red Stage at 4pm. The stage was very high, and there was a considerable gap between crowd and bands, unlike the previous two, so it felt a bit arena-like.

This time, the set opened with ‘Grip’ and Baz continued to sing the whole set, comprising ‘Spectre of Love’, ‘Nuclear Device’, ‘Peaches’, ‘Lost Control’, ‘Duchess’, ‘All Day’, and ‘Heroes’.

And so concluded my 200th gig, a journey that started on 11.6.77 at Dunstable’s California Ballroom…what a way to mark the occassion! Again, a meal was had with the SIS Japan ladies [very few male members, I noted!], this time being ‘Monja yaki’, which is essentially Okonomi yaki with egg added to make it more liquid.

The ‘official’ tour had ended, with the band due to return to Blighty the following day, but JJ still had work to do [hence earlier protecting his vocals]; he had agreed to lend his support to a band he had produced at the end of the seventies/early eighties, and who one hadn’t played ‘live’ [they are a ‘cyberband’] for twenty years – ‘Lizard’. The venue, in Tokyo’s Shinjuku ‘Loft’, was a very small one, holding around 500 people. It was just like The Stranglers early days, and so, it transpired, was the music. ‘Lizard’ came on at around 7 pm, and from the off, JJ’s influence was very apparent; they are a four piece, with a synth player/drummer/lead guitarist-vocalist and an excellent bass player. The very small English contingent present all remarked on his heavy bass sound, which dominates – great! 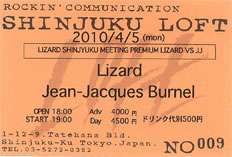 About forty-five minutes later, ‘our producer’ was introduced by the band, and JJ appeared; apologising for his cold, he then proceeded with an acoustic set comprising, ‘Where I Live’, ‘I Hate You'[with Keiji on harmonica], ‘Sorrow[?]’, ‘We were Lovers’, and ‘Dagenham Dave'[revealing, for the first time, JJ’s whistling abilities]. He concluded with a rousing, `Something Better Change`’played with an electric bass and `Lizard`, so two basses [a la ‘Dead Loss Angeles’] for the price of one – brilliant!

Should anyone be interested in learning more about ‘Lizard’, [I’ve been out and sought a CD here, but no luck yet!], and I highly recommend their live presence, then you can do so here

This was a great few days of touring with The Stranglers in a country that is very easy to get on with [if you’re not a veggie!], albeit rather pricey at the moment; I’d like to thank JJ and the band for everything, and Yuka, Rieko and all the other members of SIS Japan for welcoming me into their fold – arrigato gozai masu! Ja Mata ne.

Thanks to Andy (& sorry for the delay!)