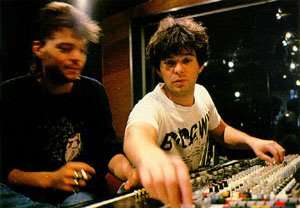 ‘My friend Laurent Sinclair has died at the age of fifty eight. He was the keyboard player for the iconic French band Taxi Girl who supported The Stranglers on the 1981 La Folie tour. He was a very talented pianist and, after that band split, I helped him with a few productions, notably a track called “Devant le miroir”. There is even a version for a TV  show featuring Alex Gifford (our saxophonist at the time), me on bass, John Ellis on guitar and it looks like the drummer of the Cure . Can’t remember his name. Check it out on Youtube

When I was asked to present something at the Transmusicales of Rennes in France I came up with the idea to form a band playing sixties material from my childhood, the Purple Helmets. He was the original keyboard player for that band.

He will be buried at the famous Pere Lachaise cemetery in Paris which is also the final resting place of Jim Morrison, Oscar Wilde and Edith Piaf amongst many other legends’.