Shortly after signing to UA, before the ink had even dried on the contract, the band made their first recording for their new record company at the Nashville in London. At their A&R man’s suggestion, the full live set was caught on mastertapes for later use but they still remain unused 35 years later…

Some images/tags are clickable for larger images 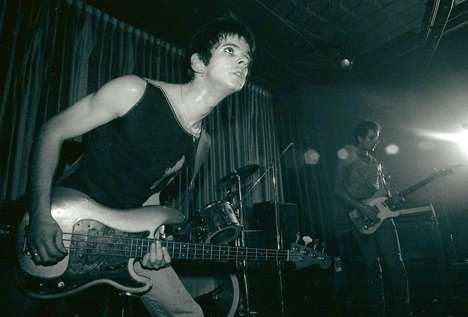 The 10th of December marked the 35th anniversary of the recording of the band live at the Nashville in the last weeks of 1976, their first recording since signing a record deal.

On the 4th of December, United Artists’ A&R man Andrew Lauder had been invited to his own personal gig at the band’s rehearsal studio. His previous efforts to see the band live had all been dogged by equipment issues and the band’s management had hired reliable gear to ensure that the event went smoothly. Finally, seeing the band in full flow and unimpeeded by equipment failure, Andrew made his decision and the band signed to UA two days later on the 6th of December 1976. Studio time was booked to record the band’s debut single Grip/London Lady and discussions turned to their album release.

Andrew had always been an advocate of capturing ‘his’ act’s live performances on tape and recalls “We were in the habit of recording everybody at that time, like Hawkwind, Brinsley Schwarz and others so we decided to make a live document of The Stranglers as well. In later years, it would always be good to have a live recording of any band at the start of their career which could be used for B sides or extra tracks”. 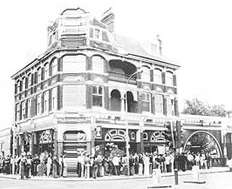 He continued “We had a very good relationship with Vic Maile, had used the Island Mobile many times before and the Nashville was easy to use as it was booked through Albion. So, to record a full live gig was relatively inexpensive and if everything came out well, it could also be used as a live album”.

Another of Andrew’s UA acts were the pub rock stalwarts Dr Feelgood who had released a live album ‘Stupidity’ in the autumn of ’76, which had stunned all concerned by reaching number 1 in the album charts. Keen to capture The Stranglers in their most natural enviroment and with the possibility of a live material to release, Andrew suggested that they should record a gig as soon as possible.

A hastily arranged date was booked by Dai, Derek and Ian at Albion at the band’s adopted London home The Nashville in West Kensington on the 10th of December, less than a week after their UA signing. The gig would be recorded on the Island Mobile studio with well known live engineer Vic Maile at the controls. Vic had worked on various successful live recordings notably ‘Live At Leeds’ by the Who as well as ‘Stupidity’ itself. 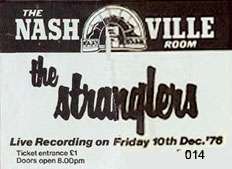 Clearly any live recording needs an audience so last minute news stories appeared in the music papers of the time to publicise the gig which was only a few days away (see cuttings). Tickets were a £1 and were available from Albion’s offices in Putney. Fans rushed to secure their tickets for this unique event and many familiar names attended the gig including Garry Coward-Williams (though sadly not in photographer mode) and the recent converts the Finchley Boys.

Chas de Whalley, one of the band’s few journalistic allies at the time, was also there that night. Chas recalled “There was a hope that they could capture something releasable of The Stranglers live set at the time – which of course they did. I think you’ll find that in those days more live concerts were recorded than ever actually came out so that’s not hugely unusual.”. 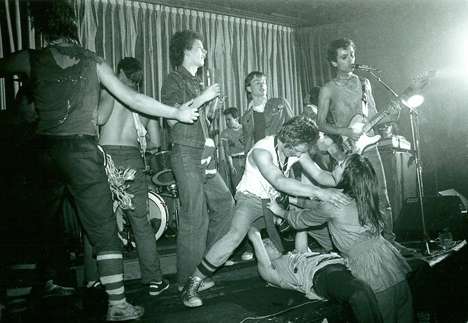 Doors opened at 8pm, with Tom Robinson in support and the band finally took to the stage around 10. A pair of badges were made to mark the occasion and were given out to the audience that night (Chas still has his!). The gig went off without any major hitches

although, as shown in photos from the night, they were joined on stage by various Finchlies and other fans. Garry C-W remembered “That was the one where everyone ended up on stage including me. I have a memory that I just stuck my head against Hugh’s Vox amp, my hearing’s never been the same since! I know I was there as I have found a half-torn ticket! I know that there was talk about a live album first — to capture the raw feel of the gigs and also, I think, because the band’s studio demos up until that point had been very disappointing when compared with the live sound”.

Tony Moon’s fanzine ‘Sideburns’, the forerunner of Strangled, were at the gig too and published a review in their first issue in January 1977. Early in the new year, Tony Moon was approached by band publicist Alan Edwards and Strangled magazine was born…

Mission accomplished! Vic & the Island Mobile had done their job capturing the band’s live set of the time. A total of 14 songs were recorded and the setlist was as follows:

With The Stranglers first recording for UA committed to 2″ tape and in the can, the band and management then listened to a playback to check out the finished work. No one was happy with the end product and the quality was, for whatever reason, dubbed ‘substandard’. Jet remembers “Yes, I remember Vic Maile, I didn’t like his modus operandi and therefore not very encouraged about the resulting recording.  Seems there was some justification!” Andrew Lauder was less surprised at the results “I wasn’t really expecting a full live album from the recording, just some spare material for use at a later stage…” The decision was taken to shelve any plans for a ‘live’ album and to take the more traditional route of a studio recorded debut.

The obvious question is whatever happened to that recording?

One solitary track, Peasant In The Big Shitty, was deemed as usable and it was committed to vinyl as the b-side of the Rattus freebie Choosey Susie. Sadly the remainder of the recording was destined to never see the light of day and it has been filed away in the EMI vaults ever since. It’s recording details consigned to be just another page of the band’s EMI tape listing. Perhaps, one day, someone will blow the dust off the can marked ‘Stranglers-live Nashville Rooms’. We can but hope…

Thanks to Jet, Andrew Lauder, Chas de Whalley and Garry Coward-Williams for their memories of that distant night. 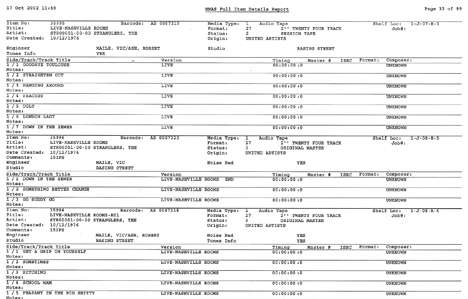 The EMI tape listing sheet for the Nashville recording…