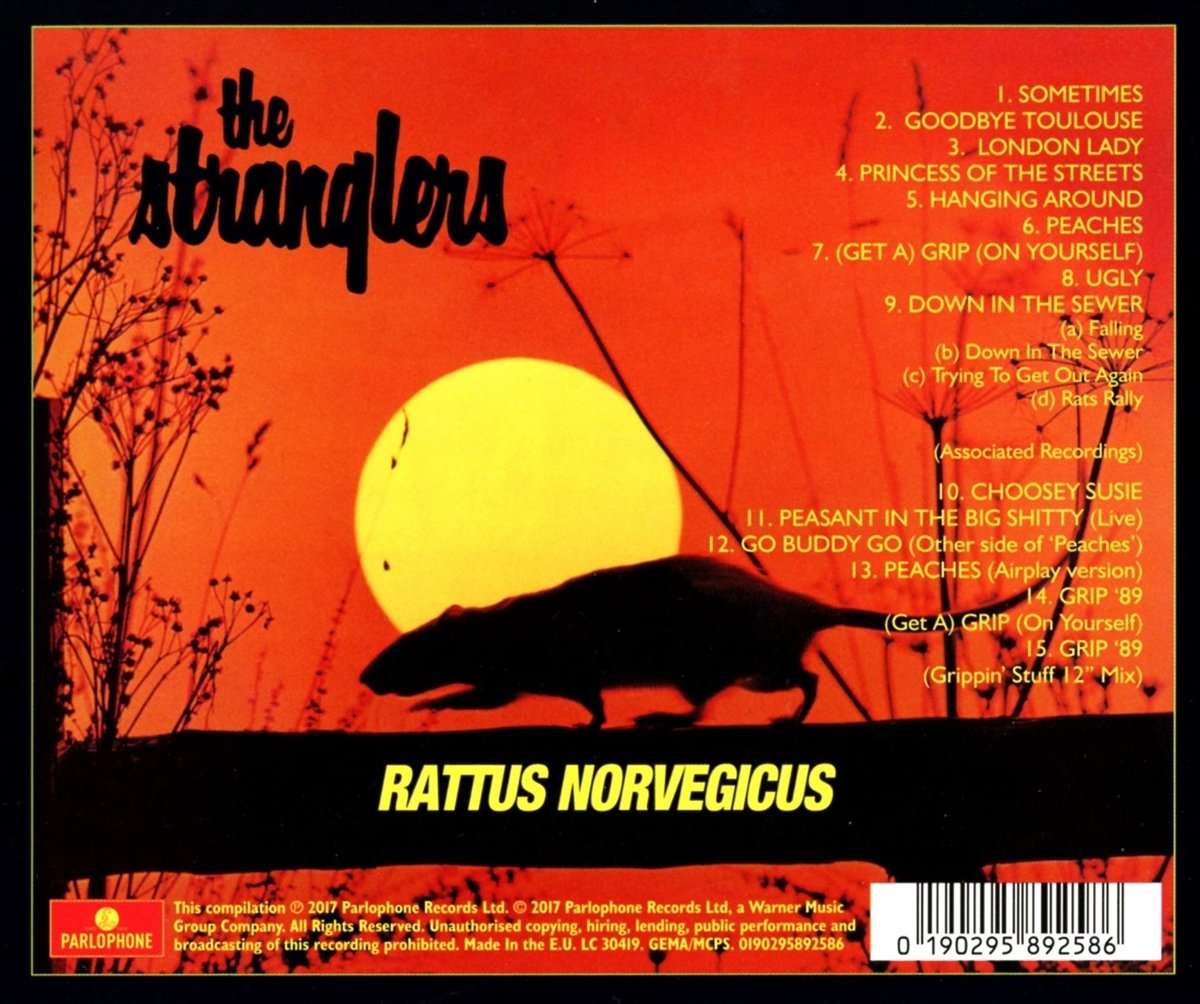 The first in a series of features on album related memorabilia starts with the band’s April 1977 debut, illustrating the large range of Rattus associated items available.

In April 1977, the band’s debut album release Rattus Norvegicus was eagerly anticipated. Their record company at the time, United Artists, got fully behind it’s release and it was promoted with a huge marketing campaign of posters, shop displays, stickers and other goodies.

With so much memorabilia available to promote the album, it is a real treasure trove for any collectors out there…

NB Please click on the small image and a larger one of the item will open up on your screen. Apologies that the larger pictures have had to be watermarked but, unfortunately, there are some unscrupulous people out there who like to copy and sell such items, which devalues the originals. This is by no means a complete listing and there will be other promo items from around the world. 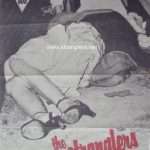 Prior to the band signing to UA in December ’76, their gigs had been promoted using a shock-horror poster which caused some controversy at the time. The graphic image depicted a real life victim of the Boston Strangler lying in a pool of blood. This 27″ x 19″ poster was also the first outing for the Kevin Sparrow designed logo which has been with them ever since…This image reappeared on 1978’s Nice and Sleazy single.

The band’s debut single in January ’77, (Get A) Grip (On Yourself), was promoted using a striking image of the group. The small white corner flash bottom right was designed so gig details could be added to it as well. Size 20″ x 30″. 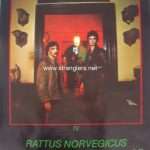 The UK release of Rattus was advertised on walls all around the country using two poster designs. Firstly, this beautiful poster based on the album cover. It is larger than the standard format and measures 30″ x 24″. Sadly, the second has eluded me over the years. It features a graphic of the rat/sunset design. (NB I’d love a scan/ photo if anyone has this other poster…)

The album’s American release was promoted using a 24″ square album cover poster, which had an A&M logo bottom right. This was a common format for US album promo posters in the late ’70s for many bands. 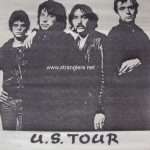 The band undertook a short US promotional trip and a handful of accompanying gigs in mid ’77, their first trip across the Atlantic.

This jaunt had it’s own small, specific poster with a punk collage type design which measures 15″ x 22″. On first viewing, it appears to be some dodgy bootleg knocked up by someone. Closer inspection reveals a small copyright mark which states A&M records 1977 at it’s base.

Rattus was also promoted in record shops using long, thin posters called window strips which were stuck to the inside of shop windows. There were two designs, firstly the actual album promo and secondly, the text only one for Peaches. Dimensions for both 5″ x 15″. 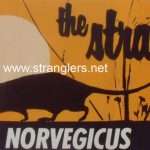 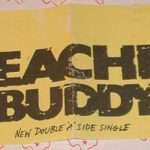 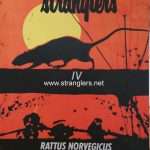 Rattus was also advertised in shops using large, freestanding cardboard displays. The board measures 38″ x 29″ and has a flip-out ‘foot’ on the back to enable it to stand up. As you can see, the rat image differs slightly from the actual album artwork. Clearly these displays were very limited at the time due to costs and very few seem to have survived over the years…

A 4″ promo sticker for Rattus was also produced in huge quantities and they ended up everywhere, including the side of Dave’s Hammond.

Rumour has it that the entire front window of the Rough Trade shop in London was covered in them at the time due to their refusal to stock the album! 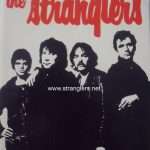 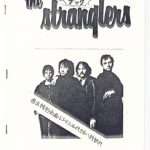 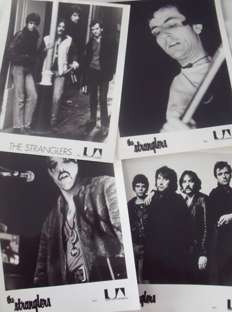 various A4 press information and photos around the world. In the centre, is the US press kit, which featured a small press release and several A3 sized reprints of some UK music paper reviews. On the right is the Japanese presskit (image courtesy of Mike McConnell’s site).

There were also many 8″ x 10″ black and white promo photos of the band around at the time, especially sought after now if they feature both band and UA logos on their base. To the right are just a selection of what were produced for Rattus Norvegicus.

Some beautiful badges were produced at the time as well, either to promote the album or to sell on tour. The set of six 1.25″ multicoloured badges above were made featuring some rather odd slogans! Very punk!

The first badges produced once the band signed to UA were the Grip and Nashville ones, marking both their gig at the Nashville which was recorded for potential first album release and their single debut. 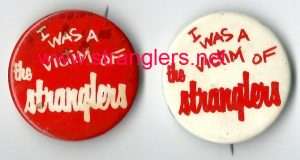 A&M out in the States produced a set of promo badges for the album which featured a rather nice touch. Both of the ‘I was a victim of The Stranglers’ badges had longer pins which stuck out pricking their unsuspecting ‘victim’! Size 1.5″.

Other items of note from this period are the 4.5″ circular card invite/flyer for the rodent themed launch party for Rattus which was held at the Water Rat (where else!!!) on the King’s Road, London that April. 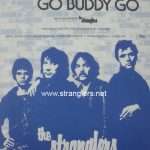 Also, Peaches was such a huge hit that summer that it was given the accolade of having sheet music printed shortly after it’s release.

The A4 foldout featured a rather fetching blue design which would have made a better cover than the later tacky ‘peach’ sleeve anyday! 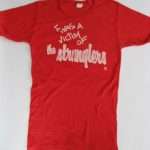 Another promo item relating to Rattus has recently come to light. It is an American promo tshirt featuring the ‘I was a victim of…’ tagline similar to the set of A&M badges. Lettering is printed in white on a red shirt and there is a small A&M company logo below the design

Thanks to Garry CW for the Rattus display photo (better condition than mine!)