Today marks the 30th anniversary of the release of the album La Folie which heralded a change in fortunes after the band’s ill-fated Meninblack period.

The next in the series of memorabilia articles focuses on The Gospel According To The Meninblack and La Folie studio albums plus the compilation The Collection 1977-1982.

The Gospel According To The Meninblack, La Folie & The Collection 1977-1982

For the second time in their career, 1981 saw the band release a pair of studio albums within the same calendar year. This article spotlights the memorabilia associated with those two albums The Gospel According To Meninblack and La Folie. In 1982, EMI also released the first compilation of the band’s material to date The Collection 1977-1982. Although the band’s relations with EMI, at that time, were grinding to a halt, the record company got behind these releases and there’s plenty of memorabilia for collectors to track down…
—————————————————————————————————————-

The Gospel According To The Meninblack

After a year and a halfs wait, the follow up to The Raven was finally released in February 1981. The recording and release of The Gospel… had been delayed by the ‘chain of unfortunate events’ that had faced the band through 1980, their annus horriblis. EMI promoted the album’s release with a range of items in the UK and their new record company Stiff America did the same in the States.

The striking gatefold recreation of Da Vinci’s ‘The Last Supper’ artwork for the album was a perfect image for poster use. The landscape format UK poster measures 30″ x 20″ and is coupled with a marbled border and the logo and album title

There is also a large ‘double-quad’ UK poster for the album which measures 60″ x 40″.Its stark, simple design features the album title, band logo and a small MiB image on a black background.

There are two American posters related to the release of The Gospel… Firstly, and very similar to the UK one, was the album poster itself. It measures 28″ x 22″ and the only difference is the addition of the tagline ‘Seeing Is Believing’ across the the top.

The second American poster features an image of a menacing maninblack standing in a corridor and was used to promote the US tour for the album in the spring of ’81. Its has ‘The tour according to the Meninblack’ across the bottom with a space where gig details could be added. Its dimensions are 28″ x 18″ and its monochrome image fits with the album nicely…

The UK album release was promoted in record shops using a two piece standalone cardboard display. On the right was a 20″ square album cover which was supported on its left by a maninblack. He looks rather camp without his album though! This display is now very scarce.

The US release was promoted instore using a

cardboard display of the gatefold Da Vinci artwork. Size is unknown and presumably had to be accompanied with posters as no other display board (with album/ band info) seems to have been produced…

Sadly, there was no UK sticker for The Gospel… but the enthusiastic new Stiff guys in the USA produced one to plug the album.

It features the same corridor image as the poster with a logo at the top and states simply ‘The Meninblack’ at the base. It measures 5″ x 3″.

Stiff America produced a small press release with accompanying photos (one of which SIS sold at the time). The press kit also contained a sticker and postcard too making a nice promotional package.

No tour badges were produced but SIS made a set of 3 1.25″ badges around the time.

There is a cloth patch related to The Gospel… which was produced by SIS and features the Meninblack lettering. It measures 5″ x 3″.

Sheet music was made for the album’s leading single Thrown Away which had earned the band and appearance on Top Of The Pops.

produced a nice promotional postcard with their ever-present Maninblack/corridor picture.

It is a standard postcard size and features release details on its reverse. 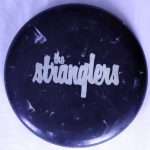 Lastly, a bit of an oddity which may be an official US promo item from the time. It is a 9″ mottled black Frisbee emblazoned with the band’s logo and it was bought from a shop in America. Although there is no mention of Stiff on it, it seems possible that their US company could have produced it. Then again, they might not… 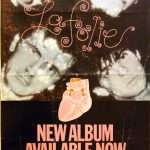 After the disappointing sales of The Meninblack, the band’s sixth studio album La Folie followed hot on its heels in November 1981. In a massive change of fortunes,it was to spawn the band’s biggest worldwide hit Golden Brown.

The second UK poster was far larger and more 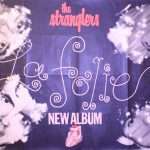 impressive, originally destined for posting on walls around the
towns & cities. It measures 30″ x 40″. 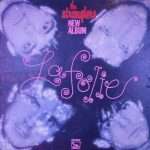 The UK release of the album was promoted using a 3 piece shop display. There was a simple, diecut logo/title board but also a 2 part display consisting of a 30″ x 30″ cardboard album cover (featuring the original clearer band photo without ‘water’ effect) and a corrigated clear plastic front piece to provide the ‘ripple’ effect. The complete display is very rare as few of the plastic parts seem to have survived… 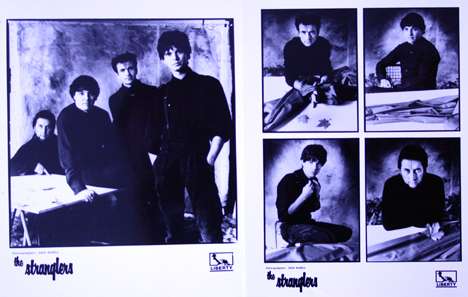 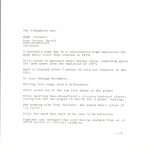 The album was publicised in the UK with a simple press release and 8″x!0″ black & white photo which accompanied promo copies of the album. Nothing too exciting…

Two other UK promo photos for the album are shown above 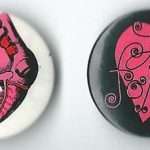 There were no official promotional badges for La Folie, just the heart design and La Folie lettering ones shown which were produced by SIS at the time. They are both 1″ in diameter. 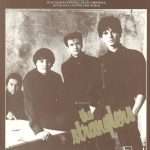 Unsurprisingly, sheet music was produced for the release of the mega-hit Golden Brown. 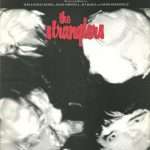 More surprisingly, they also produced one for the French language title track La Folie as well.

The band’s swansong on EMI (the first time around) was the compilation The Collection 1977-1982. The album itself was released in a rather plain, non-descript ‘keep-fit’ cover, much at odds with all the UA/EMI covers up to that point. In some territories, the cover featured a far superior image with the band’s logo pushing through black plastic a la X Certs. The album’s tracklisting also surprised both critics & fans alike. The release as a whole caused many letters of complaint to Strangled magazine with accusations of EMI cashing in etc. 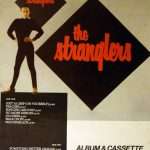 The plain UK poster measures 28″ x 19″ and is a pretty uninspiring reproduction of the album cover.One for completists really… 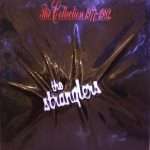 EMI excelled themselves with this beautiful dislay item! As mentioned earlier, a different sleeve design had been used for some other territories (and was even produced as a proof sleeve for the UK release but was sadly changed). This more striking XCerts-alike design was used to promote the album in shops and this large 30″ x 30″ molded plastic 3D display was produced. One of the nicest promo items ever produced… 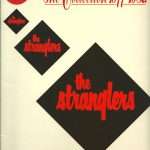 The EMI push for the band’s first compilation album also saw them produce their first dedicated songbook which included sheet music and lyrics for each of the album’s tracks. This A4 sized book contains a few other band photos plus a short Chris Twomey biography… 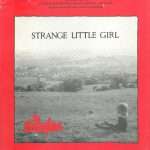 The only ‘new’ track on The Collection was the band’s masterstroke reworking of their original (EMI rejected) demo Strange Little Girl. It was a great parting gesture and became a huge hit. Accordingly sheet music was produced for it’s release. 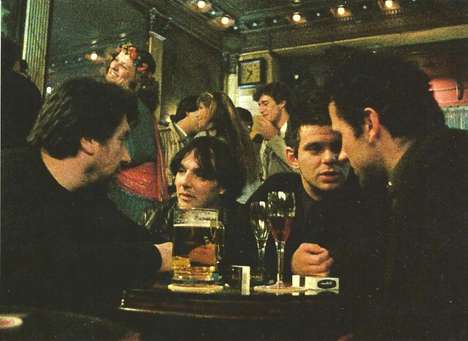