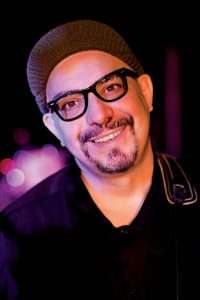 We have received this from JJ about the passing of his friend Pat DiNizio:

‘Pat Dinizio has died aged 62. He was a great songwriter,larger than life personality and the main man and lead singer in the american band The Smithereens. I first met him in the early eighties in New York when CBS had signed us up and were trying to figure out how to deal with our first release on their label , an album called “Feline” which was not what they had expected and also was very “european”. He was doubling up as a music journalist at the time and professed to be a big Stranglers fan. I wasn’t used to that in those days!

Over time we became mates and in 1996 he asked me to play bass on a solo album entitled “Songs and Sounds”. So in 1997 I flew over to Charlotte North Carolina for a week and recorded the bass. Later that year I embarked on a tour of the states with the band for this solo album which comprised of Tony “thunder ” Smith ,myself and Pat with the guest appearance of Sonny Fortune a legendary old jazzer. That tour was an education. I had never played with such a drummer and he teased me musically and technically and ultimately helped me be a better bassist. We have lost a very talented man from New Jersey who could do a very mean imitation of Marlon Brando in the Godfather. jj’