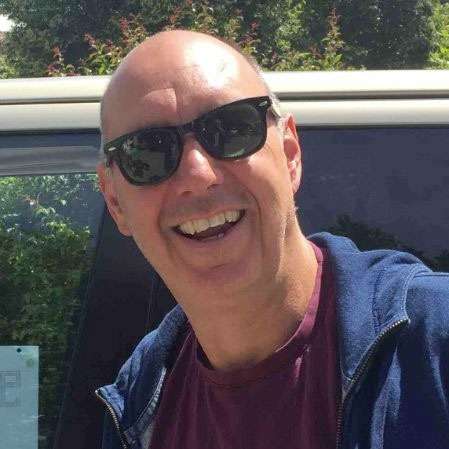 The band’s manager & Cruisin’ Music head man, Sil Willcox, has been involved with The Stranglers since the mid 80s. Initially he was keyboard tech in the road crew before making the step up to manage the band. As manager he is fully involved with all aspects of the group and we thought that he could shine some light on the business side of The Stranglers:

How did you first get involved in the music business?

I was in bands from when I was 12 years old, I played with Stranglers’ crew boss Bruce Gooding in a band when I was 15. I got a publishing deal with Island, started a band called Big Square, toured with many famous artists and had a lot of fun.

What made you make the change from musician to roadie?

After giving up my Directorship position in printing when I was 21 to be a struggling musician I was on the dole for 3 years. I started taking work tour managing for some indie bands and realised that there was probably more of a chance of me remaining in music in a role on the business side.

When did you start working with the Stranglers?

My first gig was looking after Dave’s keyboards at a festival in La Louviere, Belgium in September 1986. It all went tits when someone stole one of Hugh’s guitars, Bruce was freaking out and then suddenly it was passed back through the crowd to the band in its case.

How did you make the transition from roadie to band manager?

I always had a close relationship with Bill Tuckey who was the Stranglers’ manager in the 80’s and I read every book I could find on music business management. I always looked at the roadie days as a stepping stone to what I do now.

Was it intimidating going from originally working as a pair of managers to doing it solo?

No. I work better on my own, I don’t like having partners, I know what I want, I enjoy making decisions and I am happy to put my hand up to my own mistakes.

With the advent of downloading and free access to music through the internet, do the band actually make money from releasing new material anymore?

The industry has changed so much in the last 10 years. Through digitisation the culture of owning music has changed because people don’t need to pay in order to access it and the Major labels saw this coming and missed the ball. If you can’t control music distribution then it loses it’s actual value as a commodity. The Stranglers put a high value on the quality of the music they record and it is hard to maintain those standards and make the same returns as were once enjoyed. That said, now the summers over I intend to steer the bands energies into writing and recording for the new album.

In the past, record companies advanced recording costs to artists so they could record new material. The record company would then release the material after mixing and production and would recoup their outlay from sales. How has this arrangement changed in recent years?

Generally nowadays, for bands such as ourselves, labels prefer the finished article delivered. This means the act has to finance the project, or find the finance, and record it before it is offered to labels. We have been fortunate to have a strong relationship with EMI and this helped with Norfolk Coast and Suite XVI. Being released on a major label strengthens the perception of the media when it comes to album reviews etc and helps with the booking of International shows. However EMI are in a bit of a rut at the moment and I think the process of release needs a different approach when looking forward to the next album.


There have been a spate of compilations from EMI, Sony & other labels in recent years. What control do you or the band have over these releases?

We have no control over, and sometimes no idea, what they are preparing. Even within the same company one department can be working on a budget compilation and another on a catalogue compilation and neither know what the other is doing. It is very annoying and the bane of many managers. When you sign your record deal you assign the rights to those songs to the label and all these 70’s and 80’s albums were assigned before my time. I try and keep a close relationship with the labels but they are going through so many changes at the moment even they don’t know what is planned for 6 months time.

Retro Rockets was the band’s first download only release. Do you think the days of the ‘physical’ format are limited?

There are hardly any stores that will stock CD singles anymore. Most labels only use the ‘single CD’ as a promo tool nowadays with the track solely available commercially as a download.

In the last few years, the band’s setlist has gravitated towards the ‘hits’ from their back catalogue. Is there a reason for this?

I disagree. The last UK tour featured Genetix, Go Buddy Go, Curfew, Norfolk Coast, Lost control, Spectre of Love, Retro Rockets, Sewer and Time to die. What people need to realise is that the band’s ‘fame’ came from their hits so why should we hide from them? Golden Brown still gets the biggest cheer because a large majority of the people who come to see the band want to hear songs that they are familiar with and promoters want to book bands that entertain a broad audience.

Having said that, the band plan to resurrect a few old corkers and also road test some of the new material on the Blue and Black tour next March.

The band has recently notched up appearances at Hyde Park, Isle of Wight, Oxegen, V, T in the Park & now even Glastonbury. What are the next challenges for the Stranglers?

We have pitched for a number of other major festivals for the next couple of years but will be concentrating mostly on writing and recording for 2011.

Retro Rockets was released to little or no media exposure. How hard is it to get radio or TV coverage for the band nowadays?

It is very, very hard. Nowadays there are so many different types of TV celebrities pushing for the same interview and promo slots. There are chefs, gardeners, hair stylists and whatever other reality TV show throws up and they’ve all got a book or song to sell. You have to keep trying but the competition is fierce.

Is it frustrating that a band with such a huge back catalogue of both hits & history gets totally overlooked in TV coverage from Glastonbury or T in the Park whilst many other lesser bands get featured?

I think that TV producers use the platforms of Glastonbury and T in the Park as a showcase for the more contemporary hip young bands that are promenant on the festival scene at this moment and that have a strong current media profile. Also they have so much talent to pick from they are spoilt for choice, I got the BBC producers to film the band at T in the Park but it didn’t make the edit. Having said that the positive buzz from those performances continue to resonate with the organisers of those respective festivals and reinforces the power of the band as a formidable festival act.


Are there ever times when you wish you could go back to being a roadie?

Not really. It was a fantastic time but I enjoy the business side of the job so much.

Your chance for tact & diplomacy now. Who’s music do you prefer: The Stranglers or the Wurzels?

……That depends on what I’m drinking.……

Thanks to Sil for finding the time to do this interview during preparations for the March tour.

Thanks to Ava Rave & Sil for photos