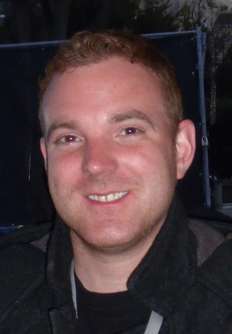 Amazingly, Jet’s tech Ian Barnard has now played over 100 gigs on The

Stranglers’ drum stool. JJ suggested that it might be fitting to mark the occasion with an interview with him for the site.

When did you first start playing the drums?

I started when I was fourteen at school. I had ten minute lessons once a week for about a year. After that, I was self taught.

Which drummers inspired you to start?

My Dad used to always listen to The Who, The Police, early Chicago and the Small Faces. All of that sort of stuff really. More recently, around the time I started learning it was Taylor Hawkins(Foo Fighters), Dave Grohl (Nirvana) and the drummer for Supergrass.

Had you ever played live on stage with any other bands before?

Yeah, quite a lot actually. When I was a teenager, I had a couple of bands and we did support tours with The Bluetones and The Music. Yeah, loads of times, never this sort of size though.

How did you get the job as Jet’s tech?

One of the bands I was playing in had John Haskett on their crew and we stayed in touch after the band broke up. I was still at college and one day he rang up and said ‘I’ve got some work for you if you’re up for it. It’s drum teching for The Stranglers’. I didn’t really know anything about the band. I’d heard Golden Brown, I’d heard Peaches but didn’t know it was them. I did the tour, it was for about two weeks. It was good experience but I didn’t think that I’d ever do it again. It was a brilliant laugh and I got to know Louie and the rest of the crew. I didn’t really get to know the band or Jet though as they just came for the soundcheck or the gig and left straight afterwards. The next summer, the first gig was Falkirk or somewhere, a Scottish festival, and Jet had asked me to come back and do it again.

Were you familiar with The Stranglers’ music before you got the job?

Yeah, but only a couple of songs…

When was the first gig that you actually played with The Stranglers?

The first was a charity gig at Dave’s local pub and it was the day after a gig on the Isle Of Skye (ed: 19th June 2005). There were problems with flights and stuff so Jet couldn’t do it. Dave still wanted to do it so they asked me instead. I had a few rehearsals at (Sil’s) farm. That gig went quite well but I did nothing for the rest of that year. The next year Jet got ill before the beginning of the French tour and they thought Ian knows the stuff from last time. It was only a week before so there was no option to rehearse or anything. We had to do it otherwise the whole tour would have to be cancelled.

That must have put pressure on you?

Yes but in a way, there was no pressure as nothing much was expected of me. If we could pull it off and try and get through the gigs. It was good actually…

How did you feel the first time you stepped in for Jet?

Pretty nervous actually. The first proper gig was this 10,000 capacity arena thing in Belgium which was a ‘Best of 80’s’ event. We only played three songs but there were shit loads of people there. I was so nervous that I was really hitting the drums hard. I went through the bass drum pedal and broke the metal shaft. After that, there was a gig in Iceland and then it was a three week tour. After the first gig, it got easier…

Are there any particular songs that you enjoy playing?

I really enjoy playing Tank, Duchess, Five Minutes-mainly the upbeat ones. I feel that I can give a bit to those whereas a lot of the other ones I’m doing exactly the same thing as Jet. In those fast ones, I’m still playing the same thing as Jet but with my own spin on it. The band seem alright with it, whether they notice or not I don’t know!!!

Or any that are especially challenging?

Curfew was always a bit weird as there’s a time signature thing in it. Golden Brown, even though I’ve played it loads of times now, can catch you off your guard sometimes if you’re in a world of your own. I’ve never attempted Genetix, not for any particular reason, it’s just not been in the set when I’ve played. I’m pretty sure I could play it but it’s a weird beat.

During the Giants tour this year, Jet was taken ill shortly after the soundcheck at the Oxford gig. Is it harder to stand in at such short notice?

Yeah, that was a pretty horrible day actually. Not really the drumming thing, just everyone was worried about him. I was a bit nervous about parts of it. The plan was, to prepare for the European tour, that I would go through three songs in each souncheck after the London gig with them. That was the first day I rehearsed with them. There were songs that I hadn’t played with them that were in the set that night. It was quite nerve-racking. After that gig, it got good again but it was a strange day really, a bit of a shock.

So there is a mental side of preparing for the gig?

Yeah, there is definitely a different mindset from teching to drumming, as I have to swap so often, from gig to gig usually through the summer. Teching you get that tiny bit of adrenalin before the gig, checking everything, because you want things to go right and not fuck up. Whereas with a gig, there’s a different kind of rush and a kind of nervous thing, which always ends up being a positive thing. You tend to not think about the technical side of things and just try to get the gig right.

Do you prefer drum teching or playing the drums live?

With The Stranglers? It’s a weird one. I don’t like the situation in which I have to drum because I know how much all the fans love Jet. Getting up there sometimes, especially on the UK tour, is hard. I don’t really want to be that person that’s not Jet, if you know what I mean. There’s nothing worse than looking at a front row of people in a gig that are all like ‘oh, Jet’s not here!’ I’m not massively after his job at all, it’s not something I ever really thought I’d be doing. It is fun and it is a great thing to have done. The band are all nice, we get on really well, I’ve known them for years. It’s not the best situation but I make the best of it that I can. It’s not something that I go around saying ‘I play drums for The Stranglers’ ’cause it’s not like that. I tech for them and sometimes drum because Jet can’t do it. It is good as well, I enjoy it once I’m up there.

Fans now understand that, if Jet is ill, and you weren’t deputising for him, then the gig wouldn’t happen…

There is that side of it and it’s nice that people realise that. I don’t think that anyone’s ever given me any stick about standing in for Jet, the fans are all pretty nice and quite accepting of me, I just don’t like being that person. It’s not to do with the fans, they’ve got brilliant fans, very loyal. Out of all the bands I’ve worked with, no one has fans that travel everywhere and have the same dedication to that one band, especially after this long. It’s pretty amazing.

Are there any different songs that you really want to tackle live?

I love Down In The Sewer, I’ve done that with them. I love Toiler On The Sea. I’ve never done Peasant In The Big Shitty which is a weird one. I really enjoy playing Sweden and Shut Up. I don’t know if there’s any different songs that I’d really like to play with them as over the years I done quite a lot…

You clocked up your hundredth gig on the drum stool with the band at Paris Olympia this year. Do any of those gigs stand out?

Isle Of Wight festival in 2008. That has got to be the best gig that I’ve done with them. It was in a tent that held 10,000 but there were people who couldn’t get it. Jet had got ill earlier in that year. IOW was the first gig of the summer and the first gig with a new tour agent. The big gigs were coming in and the first of them was the Isle Of Wight. The brilliant thing was that the band had no idea how many people would come to see them, especially as we were on at the same time as the Kaiser Chiefs. I went to check what the crowd was like in the tent for the band on before us and there was hardly anyone there, which was very disappointing. I went backstage to get changed and when we came on, it was packed. All my friends and family were there, the band were happy, the agent was happy. So probably that gig I reckon…

Yes, they were getting treated nicely. All of those gigs were just a step up. Size of stage, catering, hotels, everything went up a level.

Your nickname is ‘Jarny’-where did that come from?

That’s not interesting at all really. Ian became ‘Jarn’ became ‘Jarny’, somewhere like Greece where that name would be fitting. I thought, for a few years, that JJ had actually forgotten my real name was Ian because he used ‘Jarny’ so much. People would say Ian and he’d look confused…

Thanks to Ian for taking time out to do this interview.