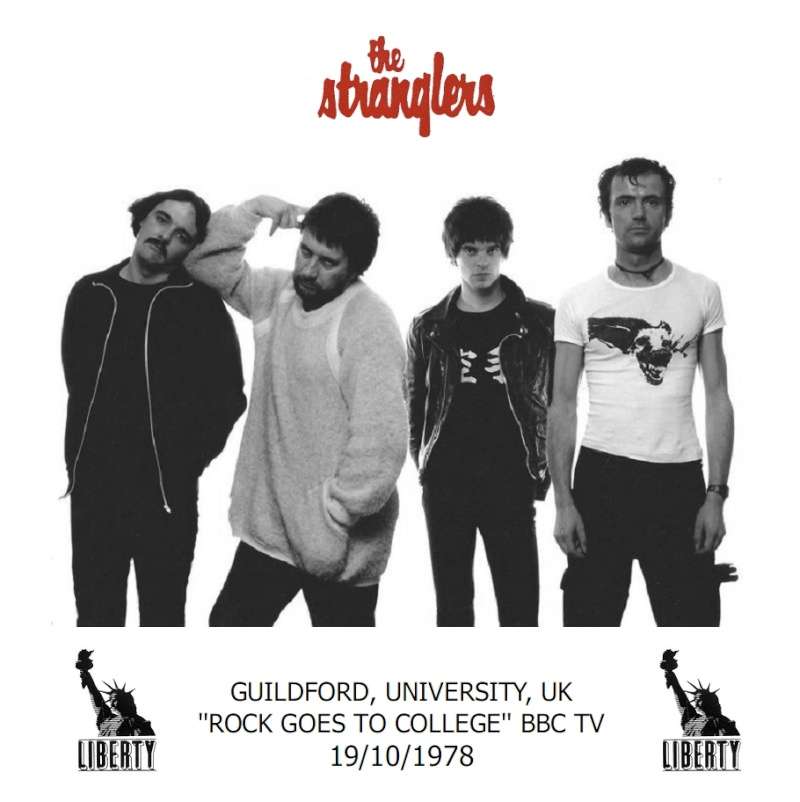 It will soon be the 35th anniversary of what proved to be a turning point in the band’s relationship with the media and the mighty BBC in particular. Following six months of solid gigging in support of their third studio album Black and White, which included their first major European & US itineraries and some high profile British dates, the band had been approached by the BBC to film a gig for TV broadcast.

An offshoot of the legendary ‘Old Grey Whistle Test’ music programme, the ‘Rock Goes To College’ series captured live footage of the featured band/artist filmed at either a university or polytechnic campus and was broadcast late at night. It was widely considered to be a great outlet for bands to display their live prowess and The Stranglers duly accepted the offer, especially given the location…

The venue selected for the gig was the University of Surrey in the band’s adopted hometown of Guildford which was a bittersweet choice for the band as, according to JJ, there was ‘no love lost between us and Surrey University. They treated us like scum. We had tried and tried to get support slots there previously’.

Having struggled to secure gigs in the town for quite a while due to a council ban and feeling for their gig-starved local support, the band stipulated that a half of the tickets for the gig must be available to fans in and around Guildford. Both the BBC and the University agreed although, in reality, this request was deliberately ignored. Tickets were distributed solely amongst the University’s students and none were distributed to the band’s hometown fans.

On the 19th of November 1978, the band arrived at the venue, nonethewiser about the disappointment of fans attempting to secure tickets for the gig, which was a total sell out. The BBC were all set up at the University with their cameras and other equipment ready to capture that evening’s gig. During the course of the day, the band discovered from local fans outside the venue that no tickets had been made available to non-students despite the fact that, in JJ’s words, ‘We thought that we had a deal with the University’.

This was an obvious breach of their contractual requirement and, following a pre-gig band meeting, they considered pulling out of the gig there & then. In a last ditch attempt to salvage the situation, the band spirited many of the fans waiting outside through the backstage area and into the hall but, as JJ recalls, ‘all those we smuggled in were kicked out’.

By the time that the band came onstage, they had decided their plan of action. They were introduced to the student audience by a DJ who advised the audience that the first few songs would not be filmed (which in fact they were). The band opened up with a frantic salvo of their most offensive songs Ugly, I Feel Like A Wog, Bring On The Nubiles and Burning Up Time, deliberately aimed to wind the audience & the BBC up, before filming was due to commence on their fifth song. Between each of the songs, Hugh berated the audience with phrases like ‘Guildford University never represented Guildford’ and ‘We hate playing to elitist audiences’, and asking if anyone present actually came from the council estates of the town. They powered into their next track, a blistering version of Hanging Around which was destined to be the final song of the gig…

As the song stuttered to an end, Jet’s drumkit went over as did some of the amplifiers, Hugh suggested that the audience should ‘fuck off’ and the band marched off stage. The BBC crew were stunned, seemingly unaware of  why the band had chosen to stop the gig. The band returned to their dressing room, ignoring requests from the BBC that they return to the stage and complete the gig.

The band didn’t have to wait long for the backlash to start. In the media, no one could believe the audacity of the band’s decision and the national and music papers were full of column inches condeming their actions. The band had taken a very public stand in support of their local fans against the actions of the all-powerful BBC and Guildford University.

As a career move, the jury was out. JJ states ‘In the short term it was definitely not a good move. In fact, I think there was a quote saying that we had committed commercial suicide on the front cover of  the Guardian. Our plugger of the time resigned there and then. The ‘Beeb’ were not happy and a large bill was dangled in front of us’. In regards to the band’s relationship with the BBC and their notoriously long memories, the repercussions continued for many years and some people are still of the opinion that they continue now…

So far, footage of only two of the five tracks filmed at the gig have seen the light of day: Ugly & Hanging Around

As their response, the band penned a snarling, bile-filled song Social Secs about the events in Guildford that day which can be heard here or downloaded here (renamed Wasting Time).

As a personal fan footnote, and with the benefit of hindsight, it must be said that the band’s justified actions that day also had a down side. If you view comparable RGTC footage of other bands from that era (like The Police or The Specials), the quality is incredible. Sadly, apart from the two tracks above, we’ve been robbed of having some classic footage from that era…

Thanks to JJ for his input and to Adrian A.