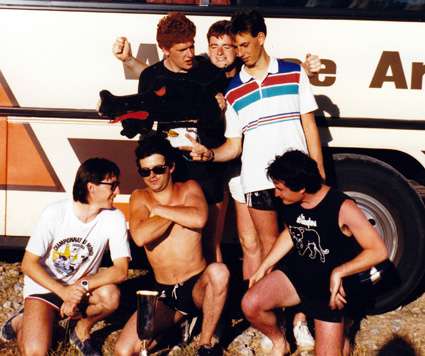 Exactly thirty years ago, JJ led an intrepid group of fans across the Channel to Nice to take part in a bathtub race in the sea off the French Riviera. The event was the culmination of months of planning, design and test sailings of the bathtub based craft. One of the main ‘Challengers’, Paul Jenner (or Peejay to his friends) picks up the story… 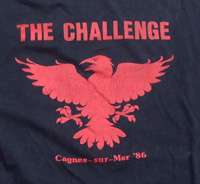 Feelin’ Alright With The Crew

As one of the quirkiest of Stranglers’ related events, on this very day (July 6) back in 1986, JJ Burnel and a group of fans participated in the 12th Annual World Bathtub Race competition that took place not far from his ‘stomping ground de la Famille’ in the French Riviera.

The assembled crew created a Viking longship of sorts – christened ‘The Ravenlunatik’ – from bath tubs and buoyancy aids, and carted it on a coach all the way from the UK to Cagnes-Sur-Mer to take part in a 500m race for human-powered craft.

JJ had accidently seen this event the previous summer while trying to convince his other half to live in Nice and thought it might a good crack to enter a British team, so SIS head-honchos Nik Yeomans and Saz Chapman set about orchestrating a motley gang of folks to take on ‘The Challenge’. 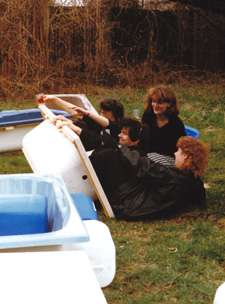 Through word of mouth & advert in Strangled, the initial meetings in Hendon, north London brought a slew of ideas and participants eager to knock together a 3-bath prototype, strap it to a van and test it in a pond in Barnet. JJ participated in these early sessions, hauling the tubs onto the van and testing their sturdiness, both in and out of the water.

Despite many spills and dunkings, avoidance of sewage outlets, and rethinking the float formation (comprised of several 10-gallon plastic drums discarded by a biscuit factory), once we’d added a sturdy wooden cage, our newly-painted jet black vessel was ready for more robust testing in Cambridgeshire.  Our shenanigans there couldn’t help but attract the ire of both the locals and the Boys in Blue, who came down to investigate, but leaving us to it after issuing a water safety lecture.

Then, onwards in a bath-carrying convoy to a quarry lake near JJ’s place in Somersham, watched this time by Dave & Pam Greenfield (who delivered sage advice on paddling), a freelance music press photographer (capturing the scene for Record Mirror and Melody Maker) and our videographer, Simon Green. The Challengers reassembled the craft, now sporting a magnificent dragon figurehead, Raven shields, and a mast resplendent with a red Raven sail, to put it through its paces one more time prior to the trip to France.

After a pre-excursion visit to JJ’s bungalow for beers and to watch Maradona’s Hand-of-God goal against England in the World Cup, it was time for the seemingly never-ending coach journey down from Leeds via London to the Sud de la France, but the destination for us forty plus Challengers was ultimately worth it – very Nice in Nice.

Bedecked in our Challenge t-shirts, the crew arrived in the city with a day to spare for chilling out in the sun prior to the big race. On Race Day itself, the weather had turned for the worst and blue skies had made way for overcast tones that heralded a storm somewhere out in the Med.

Regardless, spirits remained high as we discussed which of the 20 boat builders would sail with ‘Skeppare Burnel’ in his Longship – Euan Smith, Mark Morris, Peter Hackman, Grant Louden and myself getting the gig. JJ registered The Ravenlunatik with the Committee and set about embellishing our already fierce-looking all-in-black crew by spraying everyone’s hair red to match our strap-on red beards! 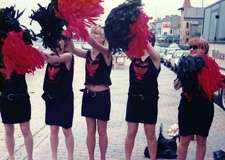 We marched our vessel down to the packed harbour – chorused by our cheerleaders, the Saz-led Stranglerettes (left) – waving our hammers, offering growls and other assorted Viking-type noises, and readying ourselves to launch our Norse Beast against the other amazing looking creations that the French, Swiss and Germans had built, including a football pitch, a banana boat and a tank! Once we’d launched into the marina, the banter and baiting began with our raucously marauding crew boarding other vessels and pelting them with eggs and fruit following JJ’s cry of “ATTAAAACK!”

The race got underway just as a squall was hitting the coast, and negotiating the choppy open sea beyond the marina proved a challenge for all of the competitors. Charging headlong into 3ft breakers we went for broke, narrowly missing other boats in an effort to distance ourselves from the pull of the shoreline. We persevered, powering forward past the early leaders and through the waves. 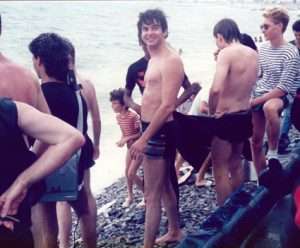 Then, disaster! A wave crashed into our bow turning us clean over. We tried in vain to right her as the bath-tubs did exactly as they should – hold water. No amount of Viking helmet-bailing would get us back on track and we ended up beached as part of the day’s flotsam and jetsam.

As cover stars of the following day’s Le Nice Matin, they said of our efforts that we didn’t even have time to “invoke Nelson” to save us from our predicament, but our Union Jack did make an appearance as I emerged from the surf with it, salvaged from our mast. 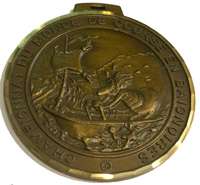 Despite no one winning or even finishing the race – out of 18 teams, 6 didn’t even start and 5 didn’t get 200m –  The Ravenlunatik team were surprise winners at the evening reception, in recognition of our noble efforts and for being British! JJ said in his acceptance speech that God had smiled on us with English weather for the day…but to no avail! Each of the crew received a medal and JJ took home the trophy which he still has today.

The following day the Challengers took a trip to Grasse, perfume capital of the South, for an afternoon picnic at an idyllic hilltop lake near JJ’s parents’ place, and we all enjoyed one last mess-about in the water prior to the long return journey back north to the UK. We did all meet once more at a Greek restaurant in North London a few months later, vowing to repeat the experience, but we’ve yet to take up Le Challenge again.

More photos from the Challenge can be found on Flickr here. Thanks to Peejay for retelling the tale of the Ravenlunatik…