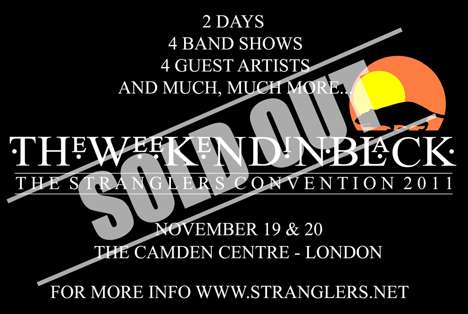 In late 2011, the fifth Stranglers’ Convention took place in the King’s Cross area of London, dubbed the Weekendinblack.It followed ten years after the previous one which was held in Pontins in Weston super Mare soon after Baz joined the band. As with all of the four previous Conventions, the planning stages started almost a year before with many different facets of the event requiring organisation. The event’s 800 tickets sold out in a month and the scene was set. A late change of venue jeopardised the event briefly at one stage but the management’s securing of the Camden Centre ensured that the Convention would take place…

For the band, work had started months before the event too. Choosing setlists and endless rehearsals meant that many songs, unplayed in years, if at all, would find their way into the three different sets that they were to play during the weekend. For JJ & Baz too, there was also an acoustic set to consider. Many hours were spent in their West Country rehearsal space honing each of the different sets… 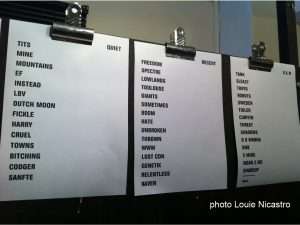 Soon enough, November came around and the black-clad hordes from around the world descended on the rejuvenated King’s Cross area of London. Fans had travelled from the US, from Europe, from Japan and even Australia to be part of the first event of its kind in a decade. The weekend promised a packed itinerary of events and live music which was to be compered by the inexhaustible John Robb.

With an early start for registration, the doors opened shortly before one to let the assembled crowd into the venue. Inside the hall, there was a merch stall, a ‘rarities’ stall and also a group from Butts brewery were selling Golden Brown beer as well as a special Jet Black porter with a great label featuring the Jet image from the B&W cover.

Around two, John Robb bounced onto the stage, seemingly his home for the next 36 hours, and introduced Mike Peters to kick start the weekend’s live performances. It was a busy weekend for Mike who had travelled the length of the country to appear at the event in the midst of his own UK tour.

Next onstage was an appearance by Alan Hillier who was part of the legendary Finchley Boys. John Robb quizzed him about the era of the Finchley Boys whilst images from the time set the scene on the projector screen behind them.

Soon after, The Stranglers appeared for their ‘unplugged’ (or quiet) set. The band have been playing acoustically for many years, mostly in Europe, so this was a real treat for UK based fans. They ‘introduced’ themselves to the audience by playing Tits for the first time in many years. The set contained many surprises notably Don’t Bring Harry and Bitching as well as the first new track of the weekend My Fickle Resolve. As has become the norm for these sets, they were joined onstage by the talented percussionist Neil Sparkes with whom they have a great rapport.

Next came an enlightening conversation between one-time band

biographer Chris Twomey and the band’s first real fan Garry Coward-Williams, aka Chiswick Charlie.Garry had chanced upon the band in autumn 1975 when he was a teenage schoolboy with an avid interest in photography. He had proceeded to capture a unique photographic record of the fledgling band over those ensuing months and he shared many of these amazing images with us at the event. For those of you who raised the topic, yes, Garry is working on a project using his photos so watch this space… 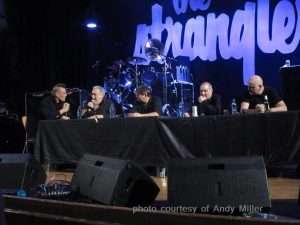 The band then joined John Robb for a chat about the main focus of the evening, the album Black and White. He is a vocal fan of the album and he posed many questions to the band detailing every aspect of the 1978 classic’s writing and recording. ‘Dissecting’ was the correct word!

Gus and Fin, the ‘Ukelele Boys’, took to the stage. Their unique ukelele versions of many punk classics had come to the notice of a certain drummer who specifically asked for them to join the bill for the weekend. Following a quick break, John Robb took to the stage yet again but this time with his band Goldblade and their street punk anthems. His energy still showed no sign of abatting!

Shortly after nine, the band reappeared for their second set of the day and the long awaited live debut of Black and White in its entirity (well, minus Enough Time which sadly failed to work despite numerous attempts in rehearsal). The album features a mix of familiar tracks which have been played across the intervening years, others that had not been aired since the late 70s and those that have inexplicably never been played live. Five minutes filled Enough Time’s slot and then the band stormed into the energetic brace of Mean To Me and Shut Up (or ‘Shuddup’ as it had become known). Live stalwart Walk On By closed the band’s set.

Saturday’s events drew to a close with a disco in the main room featuring Ray Gange (of Rude Boy fame) on the decks and a packed pub quiz in the small side room. 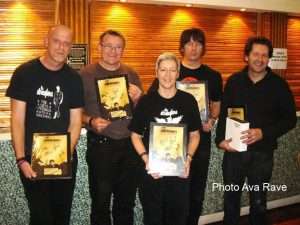 The fiendish questions were put by quizmasters John Robb and Ava Rave to the ten teams and the hotly contested competition was finally taken by the victors ‘Rattus Rejects’. They each won a signed photo and a beautiful engraved trophy courtesy of Rab and Tracy.

For fun, pit your Stranglers’ wits against the questions below

Solo stuff
9. In the Euroman track Euromess, who burnt a torch against the Warsaw Pact?
10. On Nosferatu, Ian Dury appeared as a fairground barker under which name?
11. Fire & Water was the soundtrack for a film. What was the film called?
12. Name the cage fighting film that JJ & Baz added a soundtrack to
13. The JJ track Un Jour Parfait came from an unreleased Stranglers song. Name it
14. Name the studios where the first three albums were recorded
15. What is Jet’s real name? (John Robb’s question)
16. What different coloured vinyls was the Purple Helmets’ Ride Again album released on?

Locations
17. In which country was the first gig featuring the Mark II line up with Paul & John?
18. Name the venue where the Stranglers first met the Finchley Boys
19. Which countrydid the band visit twice in 1979 for tours?
20. In which country was Hugh’s penultimate gig with the band?
21. Where is the Hugin Longship located?
22 The band had a run in with the Raggare in which Swedish town in 1977?

History
29. Hugh upset the GLC by wearing a ‘Ford’ tshirt at the Rainbow. Which band were they supporting?
30. At which venue did the band first support Patti Smith?
31. Name the landlord of the Hope and Anchor namechecked on Bitching
32. Name the jazz musician who inspired the lyrics to Ain’t Nothin To It
33. Where was Paul Roberts’ first London gig with the band?
34. The band played 3 gigs in a row at Hammersmith Odeon in 1987. What were the dates?

General
35. Name the string section who appeared at the Albert Hall gig
36. The video for 5 Minutes shows that the song last for exactly 5 minutes. In reality, how long is it?
37. Pam & Dave Greenfield used to keep pet rats. What did they name them after?
38. Who took the cover photo for Black and White?
39. In which country was the ‘Australian Outback’ location for the Nuclear Device video?
40. Using Japanese characters, write the band’s name

Tie Breakers (Unused)
1. From Left to right, name the sequence of band members on the cover of the Duchess single
2. The band played one solitary gig in a year. What year and where was the gig?
3. Name the company who provided the fireworks that blew up Wembley Stadium for the band’s ’79 Who support
4. Name the brass section on the 10 tour
5 Name the prison in Nice that the band were incarcerated in

if you need help, here are the answers!

Doors reopened at noon which seemed a popular decision with those who’d burnt the midnight oil on the Saturday night. Many were still worse for wear… John Robb did a brief intro to the day and then JJ and Baz appeared on stage for an unlikely hit of the weekend-a Pad Thai cookery session. As JJ chopped and stir-fried, budding stand up comedian Baz excelled as co-host and the dish was then served to the unsuspecting fans at the front of the barrier. The smell of garlic reached the far corners of the building…

After quickly composing themselves, JJ & Baz were back out for their acoustic set. which included many surprises from across the years (set), including Baz’s solo rendition of Bless You. The promised live debut of You Are A Swine followed which was recorded for posterity and even featured an unplanned change of vocalist… The Choir sang their hearts out!

Omnipresent compere John Robb then posed a varied range of fan-submitted questions to the band before the return of Gus and Fin for a second helping of their inspired cover versions. Belgian band Polyphonic Size were on next and were joined by Mr Burnel for a pair of tracks J’Ai Toujours Aimee and JJ’s Europhile anthem Do The European. JJ had hinted at his planned appearance with PS in his ratter back in the summer.

The auction was next and a gavel-less John Robb took to his new auctioneer role immediately. Eleven items were auctioned ranging from banners, meet and greets, band instruments and even a bell. The highest bids were attracted by Baz’s Telecaster and JJ’s Kinkade acoustic bass which both went home with proud new owners. A charity raffle followed for a variety of prizes and this raised just over £1000 which was donated to the Help For Heroes charity (thank you letter).

Glen Matlock had pulled out at the eleventh hour but luckily his shoes were filled by the legendary Wilko Johnson. His setlist of fast paced R&B set us in good stead for the weekend’s Stranglers finale. The event was bought to a close with a varied selection of songs from across the band’s career and including four more new tracks from 2012’s Giants album (Freedom Is Insane, Lowlands, Boom Boom and the title track Giants itself).

The band passed on their heartfelt thanks to the audience and the weekend’s events drew to a close. Everyone left to travel home by whatever means hoping that it won’t be ten years until the next one. Somehow, I think they may be right…. 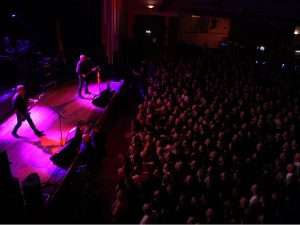 The list of thanks for the event is huge but here goes: