For many years, The Stranglers have been the focus of record collectors with their long and illustrious career providing a wealth of vinyl and other releases for fans to track down. The subject of which particular items are the most sought after or desirable has been discussed and argued at length for ages. To try and produce a definitive list of the Top 25 collectible 7″ singles from around the world, we spoke to three of the best known Stranglers collectors to produce a run down of the rarest records. Between the four of us, we have well over 100 years of avid Meninblack collecting knowledge so the collective results should be a good indication…

Just to clarify a couple of restrictions that we placed on our choices. The single must be either a standard release (some were withdrawn shortly after release) or a promotional/demonstration record which were distrbuted to radio stations and the like. We agreed that the list should not include acetates, test pressings or mispressings but concentrate purely on actual releases. Each of the singles we selected are incredibly rare and expensive (generally) whenever they come up for sale, normally securing three figure sums. Tracking these items down is nigh on impossible and, when you do, be prepared to bid your life savings away to secure one! Guide prices are shown for each single although these can fluctuate wildly-especially with online bidding. The singles are arranged in a loose geographical sequence rather than in ‘rarity/desirability’ order.

So, let’s delve into the world of Stranglers collecting for a guided tour of their rarest singles:

‘Peaches’ ‘blackmail’ sleeve (UK)
The original withdrawn picture sleeve for the release of the band’s second single is a legendary rarity. The band pulled its release due to the similarity between the blackmail style lettering and that used by the Sex Pistols. Their record company UA destroyed the vast majority but a few escaped the furnaces and leaked out. It is uncertain how many actually survived, estimates of around 50 copies seem accurate. Some radio promos were sent out in the ‘blackmail sleeve. The sleeve was bootlegged in the early/mid 2000’s, with a repress of the promo, and these appeared on either clear or black vinyl. Sadly these bootlegs fooled some unsuspecting collectors who paid large sums for them. To scupper the bootleggers, the ‘blackmail’ sleeve was given an official re-release, with a green vinyl single, for Record Store Day in 2014. The original sleeve only occasionally comes up for sale and has even achieved over £1000 when the promo was included… Sleeve value £750+ 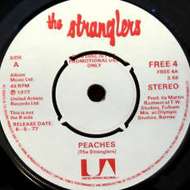 ‘Peaches’ Free 4 promo (UK)
Due to the ‘offensive’ lyrical content of Peaches, a cleaned up version of the song was sent to DJs to promote the single (changing the words ‘shit’ and ‘clitoris’). This censored promo was distributed in either the ‘blackmail’ cover or in a plain white sleeve bearing a sticker with the standard release catalogue number info. Clearly, most valuable in the original sleeve, the promo single itself is also sought after. Value £100-£150 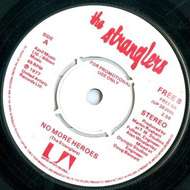 ‘No More Heroes’ Free 8 promo (UK)
Bizarrely, No More Heroes was considered too long for radioplay and a single sided, shortened version with the keyboard solo omitted was sent out to DJs. This edit is now extremely hard to find and commands a higher value than the Peaches demo. It is worth noting that two other promos of the single were made, a single sided one (with full length track) and a standard version (with In The Shadows on the reverse), but they are far less desirable than Free 8. Value £125-£175 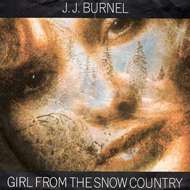 ‘Girl From The Snow Country’ (UK)
As with the original Peaches sleeve, JJ’s withdrawn single from 1980, Girl From The Snow Country, has a holy grail status amongst collectors. Unaware of his impending solo single, until a chance visit to UA, JJ forbade its release and demanded that all copies were destroyed (having seized a box of the singles himself). UK sleeve has brown tinted design and most bear the ‘factory sample’ sticker on the rear of the sleeve which belies its source from ‘the box’. To cash in on its collectability, the single was later bootlegged and came in a white sleeve with either a blue or red design on cover. Value £600+ 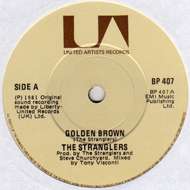 ‘Golden Brown’ UA label (Ireland)
Due to a mix up at the Irish pressing plant, a few of the band’s Liberty era single Golden Brown were accidentally pressed onto old stock UA labels, creating an immediate rarity.

The most sought after of the Irish releases, they hardly ever come up for sale. The standard Liberty version commands a fraction of the UA’s price. Value £125+ 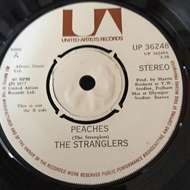 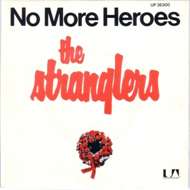 The French release of No More Heroes featured a picture sleeve with a different design on the back cover and a large logo added to the front.

Like all early UA era French single releases, this is now extremely rare but the hardest to find is… Value £200+ 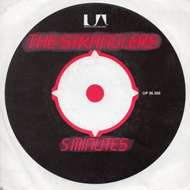 ‘Five Minutes’ (France)
The rarest European release! Another different rear sleeve design found its way onto the French issue of Five Minutes. The front of the sleeve was totally different to the UK one featuring an odd ‘push out centre’ design.

This single is now incredibly hard to find, especially with the cover in good condition and its price reflects that… Value £400+ 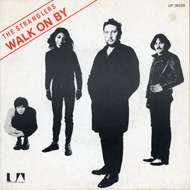 ‘Walk On By’ (France)
Yet another early French single makes it onto our list. The French issue of Walk On By again comes in a sleeve with a different rear design and with lettering added to the front. Dropping Old Codger, the two track single only features Tank on the B side. Its rarity is further increased by the fact that there are two label variations (with either molded silver or bronze label versions) out there… Value £200+ 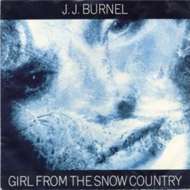 ‘Girl From The Snow Country’ (Holland)
Amazingly, a Dutch release of Snow Country… (in blue coloured version of the sleeve) was scheduled too and, alledgedly, it actually reached the shops for a single day until it was recalled. Its commercial availability, however brief, makes it slightly more common than its UK counterpart although the current price for both is now fairly similar. Value £500+ 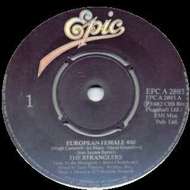 ‘European Female’ (Greece/Italy)
Impossible to say which is the rarer between the two, so we included both! Probably the rarest Epic era releases worldwide and neither come up for sale often. Value £100+ each 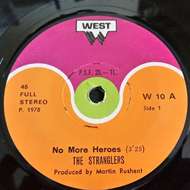 ‘No More Heroes’ (Turkey)
Yet another fairly recent arrival in the collecting world and incredibly hard to find in good condition, especially its dirt-attracting picture sleeve! Bizarrely, the Turkish No More Heroes single was issued by the West record label who also issued ‘God Save The Queen’ by the Pistols in Turkey. Value £200+ 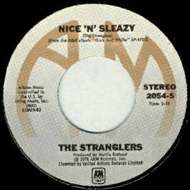 ‘Nice & Sleazy’ stock copy (US)
Across the Atlantic to North America next… The A&M release of Nice & Sleazy was the band’s first single Stateside after the 1977 Pink EP and proves almost impossible to locate. Sadly no picture sleeve was issued and it came in a generic company sleeve. Beware, there was also a mono/stereo promo copy of the single sent to radio stations but these are easy to find compared to the actual ‘standard’ issue and are only worth about £20. Value £400+ 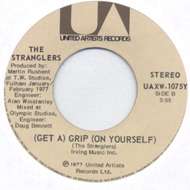 Sadly this release again came without a picture sleeve. It is very scarce now, but not a patch on the Sleazy A&M stock. Value £200+ 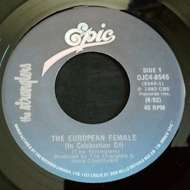 ‘Golden Brown’/’European Female’ promo (Canada)
Another unique coupling from Canada, this time for an Epic promotional single which featured European Female and Golden Brown. Not such a strange move as, with no Canadian release of La Folie, Golden Brown had been added to the Canadian issue of Feline instead. Value £125+ 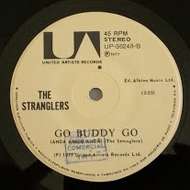 ‘Peaches’ (Chile)
Down to South America now which has produced some of the band’s most sought after singles and all five released there feature on this list! 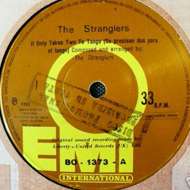 ‘It Only Takes Two To Tango’/’Ain’t Nothin’ To It’ (Bolivia)
Another unique combination made even more bizarre by, firstly, the choice of tracks and, secondly, the fact that there’s a labelling/pressing error on the release as the B side label actually states Let Me Introduce You To The Family but it plays Ain’t Nothin’ To It!. Sadly this beautiful rarity was only released in a generic sleeve. Originally the rarest South American single, it has recently been overtaken by a pair of Columbians, but it still commands big money. Value £300+

‘Get A Grip On Yourself’ (Colombia)
The two rarest South American singles were produced in Colombia and these are made even more desirable to collectors as they both came in fold out picture sleeves (albeit with only slight differences to the UK ones). Strangely, both of these singles have come to light in recent years, around thirty years after their release. Firstly Get A Grip On Yourself , with its bizarre tilted cover design, has appeared for sale once so far… Value £500+

‘Something Better Change’ (Colombia)
…and secondly Something Better Change which again has only appeared on one occasion. The two Colombian 7″s probably represent the rarest Stranglers singles worldwide (or until another new find appears!) and when/if another copy of either appears, the bidding war will be fierce. Value £500+ 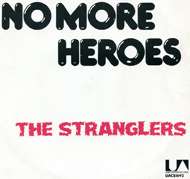 ‘No More Heroes’ (Brazil)
The Brazilian issue of No More Heroes has been a target of collectors for many years especially as its picture sleeve featured a totally different design to the UK one including some odd seventies bubble lettering for the title. Once incredibly scarce, this is now probably the most common South American single to find although it still commands huge prices. Value £250+ 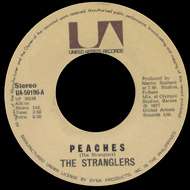 ‘Peaches’ (Philippines)
Apart from Japan, this is the band’s only full release single from the Far East and only a handfull have ever surfaced for collectors since it first appeared around ten years ago.

There is also a promo copy with extra print on the label. The last copy for sale nearly reached £450 on eBay. Value £400+ 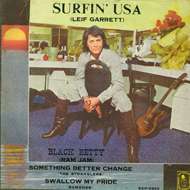 ‘Something Better Change’ EP (Thailand)
A debate raged as to whether we should include this as it’s a compilation rather than an actual Stranglers’ single. This is a very bizarre release from the Far East, coupling tracks by four different (& diverse!) artists on an EP with a picture cover. The Stranglers feature alongside The Ramones which only serves to increase the price of this rarity as fans of Da Brudders are after it too. There are also Thai EPs featuring The Pistols and The Jam which are highly sought after. Value £400+ 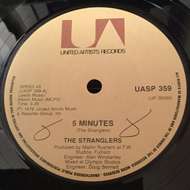 ‘Five Minutes’ (South Africa)
Another very recent discovery, it only surfaced on eBay about thirty years after its original release. This generic sleeved South African UA issue is visually unexciting but almost impossible to find. Value £300+ 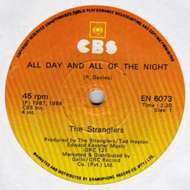 ‘All Day And All Of The Night’ (Zimbabwe)
Yet another rather uninspring African release which is also the latest issued single in our Top 25. It has just recently come to light and only a few copies have come up for grabs. Value £125+ 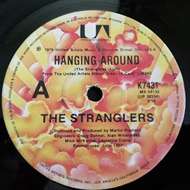 ‘Hanging Around’/’Get A Grip On Yourself’ live (Australia)
Another unique coupling, this time coming from Down Under and combining two tracks taken from Live X Certs. Sadly lacking a picture sleeve but featuring the beautiful Aussie ‘cloud’ label. UA Australia also produced another unique pairing when they released Nuclear Device/Don’t Bring Harry double A side (as well as the standard Nuclear Device single and Harry EP!) which only just missed out on a Top 25 place. Value £125+

This list was collated with the help and advice of avid collectors Neil Horgan, David Snaith and Mike McConnell who are all fully fledged vinyl junkies dedicated, for many years, to seeking out Stranglers rarities from across the globe. Mike also runs an exhaustive and essential website for collectors of all things Stranglers which can be found here. Hopefully, this guide will be of interest to those who already have the collecting bug or those who are thinking of taking the plunge. Happy collecting!!!