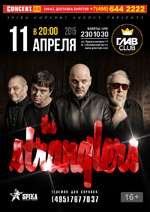 In April next year, the band venture into the former USSR for the first time in nearly 20 years to play a gig in Moscow. The concert takes place on Saturday 11th at the Glavclub in the centre of the city and the venue has previously played host to a variety of bands from the West. Baz is excited at the prospect: ‘Just heard about the Moscow gig…I’ve never been to Russia before…looking forward to it…I just hope they let us in…and out!’ Details (in Russian!) can be found on the venue website here and tickets will be available here